Emberwind [$0.99 / HD] is a delightful 2d action adventure side-scrolling platformer with fantasy themes, published by Chillingo and ported to IOS by Innogiant. It was originally released on PC / Mac by TimeTrap in 2009– And yet, it’s still a wonderful game to play today, on our fancy new hi-tech iOS touch screens.

This platform game has a fantasy storyline.  The city of Grendale has been besieged by gremlins led by the demon war-lord, CandleFinger. And the King has suddenly gone missing. As the local watchman, ‘Kindle’ the heroic fire-gnome bravely sets out to investigate. He rides into each level on a giant white snow-owl, called ‘Wick’. His adventures unfold through cut-scenes and in-game dialog with the characters he meets as you unlock  the world map. While there’s a storyline, you can still replay levels for better scores, or just for pleasure.

The game involves running, jumping, collecting acorns and diamonds for points, and collecting food for health – all as you’d expect from a platform game – but you also mash the attack button to fight nasty gremlins with your ‘Cane of Justice’.  When confronted by a particularly large mob of gremlins, the button mashing sometimes feels excessive, as they require multiple hits to dispatch, but if you chain together several hits in a row, you’ll earn a power burst which blows them all away. Problem solved! 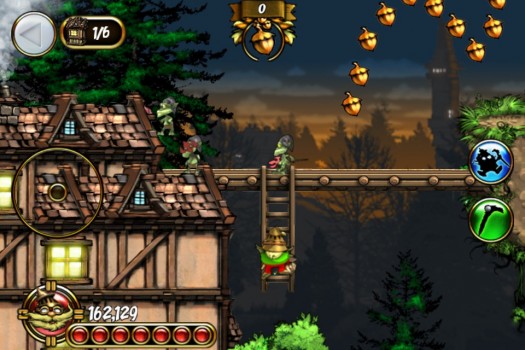 As you progress you gain additional attacks and abilities, like bowling over enemies with a dashing death-roll. Little creatures named “brownies" can be found who gift you special-attacks, like shooting fireballs from your cane, which is rather handy. I’ve seen some comments online that the game is too long and that the gremlin fighting eventually becomes repetitive, but I’m still enjoying it and there’s boss-fights and levels where you fly around on Wick, to spice things up.

There’s heaps to explore, with locations underground, indoors, underwater, on sailing boats and even amongst the clouds. You can roam quite freely and there’s more than one route through most levels. Houses can be found and rescuing the villagers inside from house-squatting gremlins earns extra points.  If you look hard enough, you’ll find hidden areas and treasure chests, perhaps even some golden apples. Three small fireflies follow you on your travels and glow when secrets are nearby, so it pays to keep an eye on them.

This game has many nice touches to enjoy.  If you ignite the fireplace inside a house, smoke pours out the chimney when you return outdoors. Also, animations occur on the world map to tie in with the story being told. If you ignite a streetlight, it kills any gremlins nearby and becomes your re-spawn point if you die, so you don’t need to re-start from the beginning each time. Once a level is completed, Kindle must return to Wick, the big white bird, to soar off to the next level, although if you’re lucky you might stumble upon a short-cut back to the start.

Emberwind really feels like an epic fantasy adventure, with layered backgrounds, a suitably dramatic music score, and gameplay which can be downright challenging; there’s always something going on.  It may have originated a few years ago, but it doesn’t feel dated. In fact, Emberwind compares favorably against most modern platform games, so I’m surprised it hasn’t received more attention. It looks, sounds and plays great on my iPad, so although some iOS ports are not particularly successful, this old platformer from the last millennium has definitely still got it.