Puzzle games don’t have to be needlessly complicated. Usually, all it takes is a simple, approachable premise to make a game memorable. Glass Tower [$0.99] managed to create such a foundation and ride its way to success as an online flash game, success that was somewhat duplicated when brought over to the App Store in the first two iterations of puzzle series. However, despite this accomplishment, excessive IAP, non-retina graphics, and the lack of online leaderboard support seemed to hold it back both titles. Glass Tower 3 [$0.99] looks to address all those issues while keeping its simple gameplay the center of attention.  After spending some time with this puzzler, notwithstanding a few issues, Glass Tower 3 is the definitive version of the series and should be checked out. 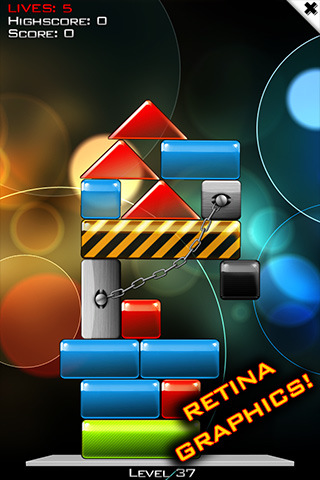 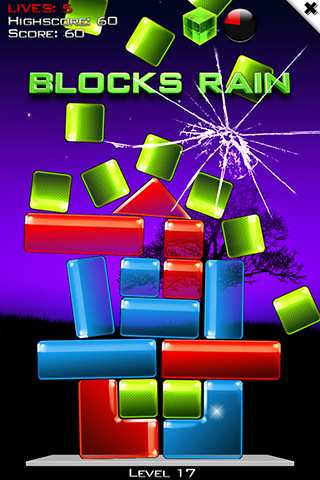 In Glass Tower 3, you are tasked with manipulating a tower full of multi-colored glass blocks sitting on a platform. Towers are comprised mostly of red and blue glass pieces, and your goal is to break all of the blue glass blocks without causing any of the red glass to fall off the platform. Increasingly difficult arrangements of glass pieces, as well as the game’s physics system, are the primary obstacles in successfully saving all the red blocks. In addition, power-ups ranging from extra lives (you lose a life every time red glass falls off the platform) to a temporary suspension of physics, help the player in solving each level.

I love the fact that there are a variety of ways to solve each level in Glass Tower 3. A patient player can methodically eliminate each blue piece while predicting the physics of the rest of the tower, while other players (myself included) can also solve levels by quickly taking out piece after piece trying to quickly balance a mass amount of falling blocks while relying on power-ups to (hopefully) bail you out. Regardless of play style, I just found the game soothing to play, especially with its ambient soundtrack. 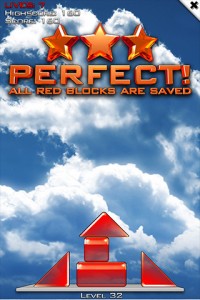 While I do enjoy the variety that the physics system brings to each level, some players may be frustrated by the occasional erratic movements of glass pieces. Also, some of the power-ups that appear during the game just aren’t balanced correctly – an entire level can easily be won or lost based on the power-up picked up. Still, I’d rather have the power-ups exist than not, as they certainly add an additional element to the gameplay.

For those of you that have played the previous games in the Glass Tower series, this third title offers several significant improvements. Most notably, retina graphics were finally integrated in the series, which was a long overdue request. Similarly, Glass Tower 3 also includes Game Center support, as well as an overhaul of the scoring system to make it easier to track scores for each level. For players that may have felt put off by Glass Tower 2’s [Free] IAP centered approach to delivering content, Glass Tower 3 has 150 levels which are all available without any additional purchases. Each of the additions above have significantly improved the overall quality of Glass Tower 3 and it’s good to know that the developer has been listening to player suggestions. My only real complaint is that Glass Tower 3 is missing the level editor that was available (as IAP) in Glass Tower 2. Considering the enhancements to the overall graphics system, it would have been interesting to design some levels utilizing these improvements.

Whether you’ve played a Glass Tower game before or are new to the series and looking for a new puzzler, Glass Tower 3 should be a title worth looking into.  It’s taken the success from earlier games, incorporated a ton of requested features, and then fleshed it out with enough new levels to keep you busy for quite some time. Physics-based puzzles aren’t for everyone, and this game certainly won’t change your mind if you’re not a fan. However, if you’re looking for something new, Glass Tower 3 looks to be a clear choice to check out.