Do you like Minecraft, but find that all of the tedious mining, building, and exploration mechanics get in the way of your enjoyment? Are you a fan of crafting objects, but feel like a 3×3 grid isn’t nearly hardcore enough? Yes? Then my friends, have I got a 6×8 upgrade for you.

At first glance, TerraCraft [Free] could be easily be confused with your standard match-3 affair. The twist here is that the game requires you to configure blocks into patterns for crafting items such as the planks, boxes, pickaxes, swords, and shields you’ve all come to know and love. This Minecraft-ian conceit takes the standard and kicks the variety up a… notch. 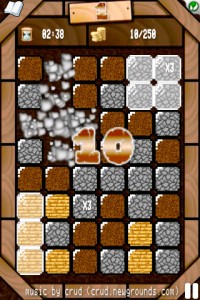 You begin the game with a small list of blueprints for items you can construct. Once the timer begins on each level, you drag and drop the designated materials (wood, rock, bronze, silver, gold) into the right pattern on the grid to “craft” an item and clear those materials from the board. Each item crafted is worth a set number of points, and the goal is to reach a target score before the timer expires.

As you advance through the levels, the point threshold for victory becomes progressively higher.  The number of material types grow, while the number of each individual material tends to shrink. These challenges are more than offset by the fact that the time limit also grows and that you unlock newer and more complex blueprints that are worth more points.

And that’s a concern. The difficulty curve in this game is non-existent. In fact, the game gets progressively easier as time goes on. While there are many blueprints to consider, there are also a number of high-value yet easy to craft items that you can spam for maximum points. Once you identify them, you’ll end up cruising. After the first few levels, I was never in danger of hitting the time limit, and after the last blueprints were unlocked I found the mystique wearing off all too quickly.

TerraCraft has some things going for it. For a ham-handed iOS gamer like me, the touch controls were much more responsive than I expected. I rarely had to redo moves. The game also sports OpenFeint integration, which gives some leaderboard support. While there’s only one main theme to listen to, the music was catchy and appropriately conducive to getting my pickaxe zen trance on.

The game is ad-supported through the first few levels, but an in-app purchase of $1.99 is required to unlock the full game and get rid of the ads. For myself, I don’t mind the use of ad-supported demos in general, but they should never directly impede the gameplay. There’s no issue on the main menu here, but once you get to craftin’, the ads partially obscure the bottom row of the grid. It’s possible to work around them but hardly a welcome means of promoting your IAP.

TerraCraft succeeds in its stated goal of providing a Minecraft spin on the puzzle genre, but the game really could have used an additional layer of complexity to create a difficulty curve and provide some longevity to the title. Why not flood part of the grid with water or lava tiles from time to time to change the shape of the playing field and force you out of relying on certain patterns? Maybe introduce an enemy tile that eats points until you craft the appropriate item (sword, shield, etc.) to destroy them?

While I was definitely left wanting, it certainly can’t hurt to give the free portion of this game a try for yourself. The Minecraft oriented theme, gracious lack of user-generated phallic sculptures, and chilled-out crafting action may be right up your alley. Personally, I’d rather punch a tree.