Ever since the success of Death Rally [99¢] earlier this year, there has been somewhat of a resurgence in isometric racing titles with an emphasis on weapons and destruction. And why not? There’s nothing cooler than setting up a shot in your souped-up racer and blowing apart the leader right before taking the checkered flag. Mad Wheels [99¢/Lite/HD] attempts to ride on this wave of enthusiasm and success and, while the title does a decent job nailing the core gameplay, its lack of any real customization definitely hurts replayability.

Simply put, many aspects of Mad Wheels are, well, simple. There are only two single player modes: a ‘Championship’ mode that has the player race through 25 tracks across four “regions,” and a randomized Quick Race option. In addition, there is no story to speak of; the only motivation to continue playing is a progression bar that goes up every time a race is won or objective is met. While Mad Wheels offers a half dozen cars to choose from (with three more as IAP), each vehicle has fixed weapons and stats, with no options for upgrades or improvements. This drastically decreases any potential replayability, as once you go through each track and nail all the objectives, there’s nothing else to play towards. 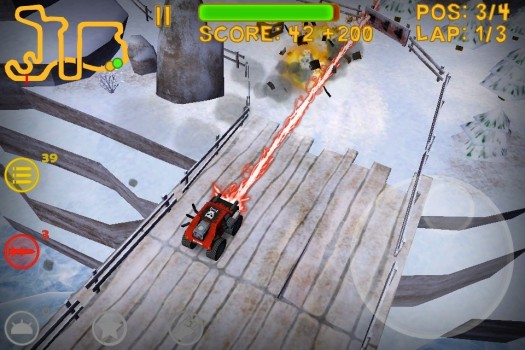 In addition to the concerns above, there are some glaring omissions in Mad Wheels that definitely detract from the overall experience. For example, there are no save states or ‘multitasking’ support within this game. In other words, if you’re playing on your iPad, and you decide to exit out to check your email, you’ve just lost any progress you had on your current race and need to start over. This lack of any save state is almost unacceptable in this day and age. In addition, Mad Wheels only uses the Crystal social network system and doesn’t even integrate Game Center. This isn’t necessarily a big deal, but still surprising considering how Game Center is poised to be the primary gaming service once the next version of iOS comes out.

Not everything is bad, however. Mad Wheels has decent graphics with a stable, fast framerate (with a visual style that makes me wish Blast Corp was on iOS). In addition, the game controls pretty well, emulating Death Rally and providing an overall decent gameplay experience. While the weapons are predictable, they are implemented nicely and preserve the enjoyment of blasting apart your opponents. Furthermore, Mad Wheels also incorporates a Wi-Fi multiplayer mode, allowing gamers to join and host multiplayer races.

Despite its issues, Mad Wheels still manages to preserve some of the fun involved with these types of weapon racers. If you’re looking for a simple, weapons-based racer with multiplayer and don’t care about customizability or excessive replayability, then Mad Wheels may be a title worthy of your attention. If you’re looking for a game with more substance and depth, then Death Rally still remains the perennial favorite and recommended title.