This past May, we came across one of the crazier trailers that we’ve seen for a game called Techno Kitten Adventure [Free] from Elite Gudz, and it featured a large man in an awful cat suit. But the silly video wasn’t the important part, as amazing as it was. What was important was that Techno Kitten Adventure, which previously had been been released as an Xbox Live Indie Game, was making its way to the iOS platform in a new enhanced version.

Techno Kitten Adventure dropped into the App Store last month to a hail of glitter and rainbows, and I even shared a few thoughts about the game on our podcast that week. Basically, Techno Kitten Adventure is a cave flyer where you travel automatically to the right, raising and lowering your position to avoid obstacles along the way. Gameplay-wise it’s about as barebones as they come, where you literally just travel for as far as possible without crashing. The farther you go, the higher your score, and that’s pretty much it.

However, where Techno Kitten Adventure earns its stripes is with the spectacularly crazy sights and sounds that blast your every sense during play. There are bright, flashing colors and all sorts of things going on in the foreground and background that are just dying to distract you during the game. There can be so much happening that it’s nearly impossible to make out the floor, ceiling, or objects in between that you’re supposed to be avoiding. This sort of artificially created difficulty would normally be frowned upon, but it’s actually kind of the point of Techno Kitten Adventure and is part of its charm. 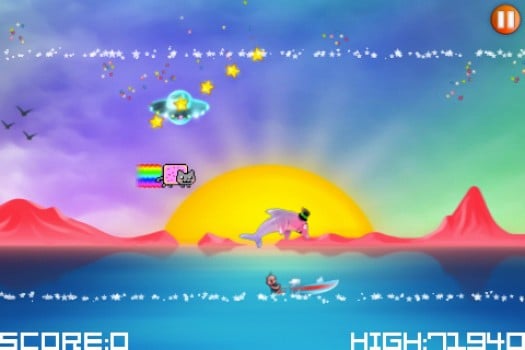 One of my favorite parts about the game are how well integrated the visuals are with the audio, starting out fairly tame and then kicking things into high gear as the beat of the song builds up and finally lets loose. I actually find myself laughing out loud at just how obnoxious things can get during a song’s peak. I’m waiting for the inevitable seizure, but so far that threat hasn’t stopped me from continuing to play.

The reason I’m bringing up Techno Kitten Adventure this time is that the game just received a new update that adds in the star of another strange cat experience – Nyan Cat. The Nyan Cat seems to pop up everywhere over the internet, and recently in progress bars as well, and is now a playable character in Techno Kitten Adventure. Unfortunately (or possibly not), the original Nyan Cat music is not part of the deal, but the Pop-Tart body and rainbow trails of the Nyan Cat fit perfectly into the world of Techno Kitten Adventure. Besides the added feline, this latest update also adds in Game Center with leaderboards and 20 achievements.

Techno Kitten Adventure is one of those games that some people will absolutely fall in love with and some will just plain not get the appeal. Luckily, this problem is easily solved by downloading the free, score-limited demo and trying it for yourself. If it ends up tickling your fancy, there are 3 different theme packs to buy from within the demo for 99¢ apiece. They each feature their own unique songs, visuals, leaderboards, and playable kitties. If you think you can handle the flashy pizazz and window thumping beats of Techno Kitten Adventure, then bust out those glow sticks and give the lite version a go.