GameLab’s D.A.R.K. [99¢] is game with a conflicting sense of self. It’s trying to simultaneously be a tense, science fiction horror game and a dual stick shooter with RPG elements. It’s a difficult line to toe and in a lot of ways, D.A.R.K. is leading with the right foot, even if it flounders a bit here and there.

The game centers on a space marine who kind of looks like one of the marines from Starcraft II, but with a mohawk, as he investigates the loss of contact with a ship called the USS Storm Bringer. As these things tend to go with science fiction narratives, he quickly learns that things aren’t as they seem and he needs to blast his way through waves of zombies and robots to get to the ships black box to find out what happened. 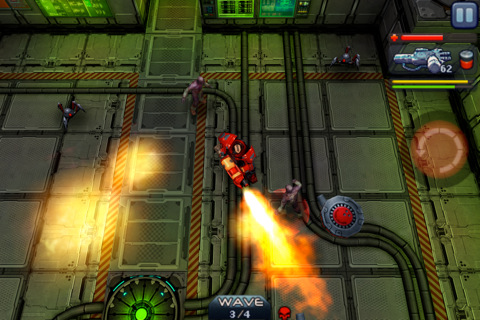 If this is all sounding a little like Dead Space or Alien to you, you’re right, but it’s not necessarily a bad thing. It’s a time honored sci-fi trope because it works. Unfortunately, D.A.R.K. never seems too sure what it’s supposed to be doing, concentrating on the atmosphere in a slower-paced horror setting, or cranking up the action as a dual stick shooter. There are short moments spread throughout the hour long campaign that try to create a feeling of dread, but much of the game relies on standard shooter concepts where you enter a room, clear a room, go to the next room.

That’s another thing too — the game’s description says, “Massive single-player campaign will have you playing for hours on end." That’s simply not the case at the moment; the first episode included here will only take you around an hour to complete. Considering the game’s low price it’s not a big deal, but one might expect more content from the description. That said, starting a new game after finishing yields some different results, so it’s worth rolling through twice. Judging by what’s being said in the forums, a second episode, universal support and an arena mode are coming in future updates, so there should be more content on the way, as well as (hopefully) a resolve for the cliffhanger ending of the first episode. 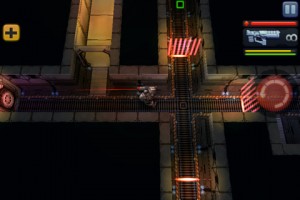 D.A.R.K. does try to mix things up with a few RPG elements to spice up the dual stick mayhem as well. While it’s not deep, it does get things mostly right. Weapons are upgraded automatically depending on how much you use them and you have a small set of stats you can upgrade as your level progresses. There are only four different upgrade paths, health regeneration, hit points, speed and power. I’m not sure what else one could be added here, but it would have been nice to have a little more character customization.

The main difference you’ll see in D.A.R.K. compared to a lot of dual stick shooters is that it is trying to tell its story and it’s doing so by pushing you through a series of rooms and offering the sense of exploration. In between the arena-style battles are short exploration bits, simple puzzles sections and the occasional big narrative moment. This is where D.A.R.K. is doing something new and it would be nice to see more of it in the second episode. The shooting bits are all well and fine, but there is a lot more opportunity for the exploration parts to really capture players and pull them into the story. The same goes for the audio design, which could use a little work, but considering the type of game it is, you’ll likely have you’d hand covering the speaker when you’re playing, so it might not be worth investing too much time in it.

The exploration pieces are certainly more geared to telling the story visually and D.A.R.K. can do so, even if it’s not always pretty. The color palette is very much in the same realm as most science fiction and the style looks a lot like Starcraft if it was set on a ship. The game is incredibly dark too, which I guess shouldn’t really be surprising — but don’t plan on being able to play it outside either way.

I rather like the idea of D.A.R.K. and with more content promised to be on the way, I have hopes it’ll settle itself and decide exactly what type of game to be and how to do it. There is a lot of potential in the idea alone, so if GameLab can deliver the second episode and the arena mode before upping the price, they might have something truly interesting on their hands as long as they’re not scared to make the puzzles a bit more challenging and the shooting parts a bit more sparse.