Traditionally speaking, Ankama Games’ Dofus series is best known for two iterations: the Flash-based MMORPG that was launched in 2004 and the Wakfu series of games which has seen iterations on Xbox 360 and an upcoming version for browsers. Dofus: Battles [$2.99 / HD] takes the pre-existing world and art style from the browser games and drops it onto iOS as a curious little tower, uh, dragon defense game with a set of RPG elements.

Despite the pedigree, you don’t actually have to be familiar with Dofus to enjoy Dofus: Battles. Nor do you have to like MMORPGs, because this isn’t one. It probably helps a bit to understand the character classes and items, but the uninitiated can pick it up quickly and without too much trouble. 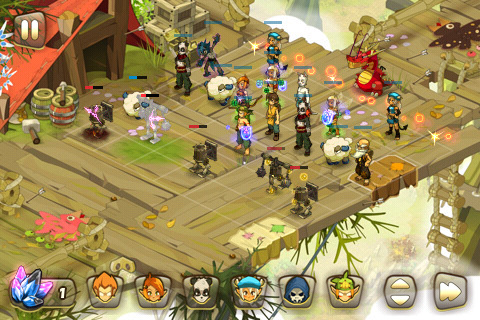 Right out of the gate, after touching the horrendously designed icon, you’ll be rewarded with a lavish visual style. The game takes the same three-quarters perspective, grid-based combat as its MMO lineage and despite a curious lack of retina support, character animations, menus and the interface are all well crafted, simple to use and nice to look at.

The game itself operates similar to Plants vs. Zombies, but the added RPG layer and the manner of unit variety means there is a different kind of strategy at play here. Instead of having a system where each unit counters the enemy evenly, you have a collection of twelve different heroes, half of which are support, the other offensive and you can choose any of them any time you want. Each has their own strengths and weaknesses, level up over time, can be fully armored and outfitted, have gender options and varying areas of effect.

It’s a bit complex, especially when you toss in an entire economy system where you can buy and upgrade armor, weapons and other trinkets. None of the units are remotely similar either — so choosing a unit type to use and when is integral to setting up your strategy. 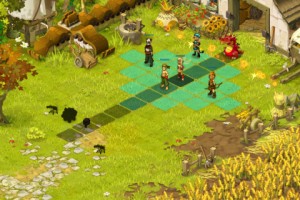 At the beginning of each turn, you’ll place your units on a grid. Enemies walk down the grid toward your side of the screen, where a dragon is hanging out — if they get there, it’s game over. To stop the massive bestiary selection from infiltrating your personal space, your twelve heroes each have different abilities — from the grunt with a one-block range to chop with his sword, to the magician who can call down giant-teethed sheep, you’ll have a huge diversity of tactical options and combos to choose from.

After you place your team on the grid, you’ll push play and the first wave of enemies will come down for some automated real-time combat. There are two different modes, wave defense and timed defense. As your heroes kill off enemy units, you’ll be rewarded with soul fragments — collect five and you can add another hero to the field.

There are 28 different levels in the game and before each match you can decide which of three difficulties you’d like tackle it on. Each difficulty will yield different amounts of experience points, monsters, soul points and rewards. It might seem like a cop-out, but the fact you can drop it down to an easier level in order to progress is incredibly helpful considering the game does seem to retain one facet from RPGs that people are likely going to love to hate: grinding. 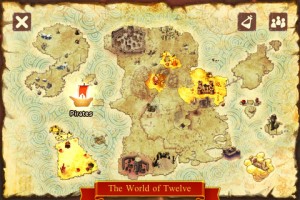 It’s not as bad as a traditional, fully-fledged adventure-RPG, but there are certain levels that are near impossible to get through without going back and cleaning up some of the earlier ones for a second or third time. That’s not to say fans of knuckle biting strategy can’t get through certain stages on lower levels, but for those looking to strategize less and use brute force instead, you can grind your characters up instead of overclocking your brain to get the strategy right. The difficulty levels change the gameplay enough to warrant these repeated attempts and you won’t be able to use the same strategy on easy as you would on normal or high.

For fans of weird, tacked on mini-games, you won’t be disappointed either. Almost without explanation the game also features an odd accelerometer mini-game where you dodge enemies and a rhythm/music game ala Simon Says. Thankfully you can skip those.

The only major complaint I have comes from the equipment screen. Throughout the game, you’ll pick up weapons and items and you can buy them if you choose — but this is the only part of the game where the interface feels unhelpful. It’s hard to properly compare items and their statistical difference is usually so slight it’s hard to justify spending you money on a weapon that only adds one point to your attack score. To be blunt, it would be nice to have an auto-equip function for lazy people who don’t feel like comparing stats for a hundred different items.

The high production values and ridiculously in-depth history, bestiary and other reading material alone is enough to make Dofus: Battles an easy recommendation, so it’s nice the game itself is actually enjoyable. The difficulty spike can be frustrating at times, but as long as you enjoy experimenting with different strategies or grinding for XP, it won’t be much of a bother. It’s doesn’t have the entry-level appeal of something like Plants vs. Zombies, but if you’re looking for a bit more depth in strategy or slightly more open gameplay, you’ll certainly get it here, even if it comes at the cost of a high bar of entry.