Several weeks back, we took a look at the video for Vampire Rush [$1.99/HD], developed by A-steroids and published by Chillingo, and the game has since launched as part of last week’s influx of new releases. Vampire Rush is a tower defense/hack ‘n slash hybrid, and if that sounds familiar that’s because the same sort of genre mishmash was used in Dungeon Defenders [$2.99] released late last year.

The problem with Dungeon Defenders, though, was that it was an excellent game that was not a great fit for the iOS platform. The complex gameplay and cluttered interface marred what would be a great experience on a full-fledged console. Vampire Rush takes the opposite approach, providing much more streamlined gameplay and an accessible interface. While it is a much easier game to grasp, it’s almost too simple, and is hampered with some imbalances and a high level of difficulty. Despite this, Vampire Rush is still a lot of fun, and with some minor tweaking and a dose of extra content it could be a standout example of this unique mixed genre. 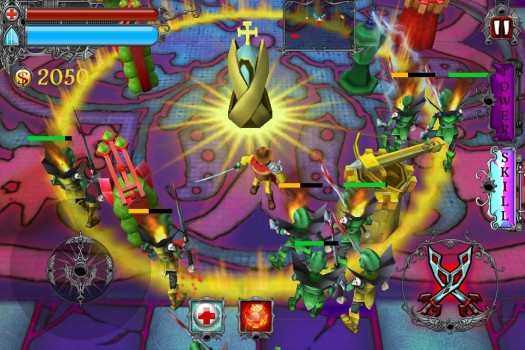 Vampire Rush’s campaign consists of 7 levels, each with 10 waves of monsters who are hell bent on destroying your gate to the outside world. The level designs are excellent, and you’ll need to strategically place various types of towers to help combat the onslaught of enemies, all while directly doing your own part by using your sword. Your character, Captain Greg, can perform a couple of different sword combos on enemies. The direct combat is basically just mashing away at a single button, but it still manages to be pretty fun frantically running all over the map dicing up bad guys.

In addition to the swordplay, there are 8 different special moves and perks for Captain Greg to use which unlock as you progress. These can be reusable moves that come with a cool-down time like partial healing or a fire attack, or single use perks like increased melee damage or gate repair. Killing enemies or collecting random chests will net you cash, which is used to enable these abilities and is also used to build and upgrade the 4 different towers available in the game. 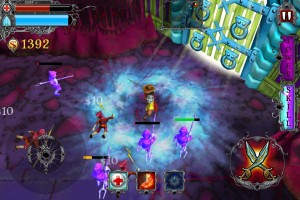 What I like most in Vampire Rush is the highly strategic style of gameplay. Tactful placement of towers and smart management of your resources is imperative if you wish to do well. You won’t be able to just crowd a bunch of towers around your gate and expect to keep it safe. Thoughtfully choosing where to put your towers while taking into account the enemy spawn points and the layout of the different levels is key. Some of the most satisfying moments in Vampire Rush are when you see your current strategy falling apart, and end up trying a level over again with a fresh approach and succeeding.

Unfortunately, these good times can be hampered by some horribly imbalanced parts of the game. My biggest problem is that your own life meter and the life of your gate can be whittled down in a matter of seconds, and before you even have a chance to react and do something about it your gate will be destroyed and you’ll be starting over from wave 1. This can get incredibly annoying, especially as it can feel like you lost due to no fault of your own.

My other big problem is the bats in the game. Oh, how I hate the bats. First of all, they are floating in the air and it’s extremely difficult to gauge how close you are to them. You may think you are hacking away at them with your sword when you actually aren’t, and all the while they are shooting at you from a distance. Coupled with the rapid rate of health depletion, this accounts for a lot of frustrating and cheap deaths. It just seems strange that the smallest, least ferocious enemies can end up also being the most difficult to deal with.

Despite these odd gameplay quirks, Vampire Rush is still really enjoyable. It controls really well, looks good, and has a simple and intuitive interface which works great. If you enjoy tower defense games and are looking for a variation that features more hands-on gameplay by way of hacking and slashing, then you’ll find a lot to like about Vampire Rush. If you’re looking for a Diablo-like game with light tower defense elements, you’ll probably end up disappointed, as the upgrading and looting aspects are minimal and don’t carry over from level to level.

With a few tweaks, Vampire Rush could easily be the best action tower defense game in the App Store. As it stands now, it’s still a solid and enjoyable first effort that’s worth checking out, just be prepared to deal with more than a few frustrating moments.