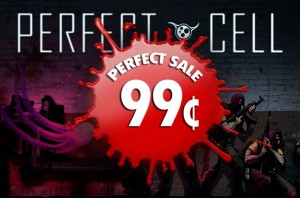 Mobigame’s Perfect Cell [99¢/Lite] was one of my surprise favorites from the onslaught of incredible holiday releases last year. It has you playing a squid-like alien who is captured following a crash landing on Earth and held captive in a research facility deep below the ocean. Obviously, Mr. Alien doesn’t take to kindly to being locked up, and quickly breaks from captivity and searches the facility for a way out. Along the way he’ll find his two alien buddies which he can fuse together with to become stronger and gain extra abilities, or split apart from to solve some of the environmental puzzles in the game.

Perfect Cell is especially cool because of the different ways you can approach completing it. You can go on a murderous rampage, destroying every soldier or scientist you come across on your way out (which is pretty much the attitude they have towards you too, by the way). Or, you can take the stealth route and try to use your cloaking ability and the many passageways hidden throughout the cleverly designed levels in order to never be seen at all. There’s even special achievements for not killing anybody, which is much easier said than done.

We gave a hearty recommendation to Perfect Cell when we reviewed it last December at its original price of $6, but starting today you can grab the game for just 99¢ for a limited time. At that price it really is a no brainer, but just to be sure you can check out the lite version and try out the game yourself first. Perfect Cell is an interesting blend of platforming, puzzle elements, exploration, and either slicing up every person you see with gruesome attacks or trying your darndest to avoid them. Definitely check out the lite version of Perfect Cell, and if you’re digging it then don’t hesitate to grab the full game during this 99¢ sale.