Yesterday the popular Tom Clancy’s Rainbow Six series made its debut on the App Store with Rainbow Six Shadow Vanguard [$6.99] courtesy of Gameloft. We’ve given the game some thorough play time since then, and have come away pretty satisfied with how the series has translated to the iOS platform. The single player component offers some enjoyable tactical gameplay, but the part of the game we were most excited about – the online cooperative play – turned out pretty disappointing. Even still, Rainbow Six Shadow Vanguard is a competent FPS that’s in line with Gameloft’s previous offerings, and should satisfy fans of the series’ recent console titles looking for a fix on the go.

The single player campaign in Rainbow Six Shadow Vanguard spans 11 missions as your 3-man team works to take out a terrorist organization. The premise and storyline bits are fairly cliché, but the missions themselves are quite fun. Each mission is pretty lengthy and features several different ways to go about completing your goals, which requires much more forethought on how to approach them than your typical FPS game. You have two AI teammates in the game, a recon specialist and a demolitions expert, that you can direct them to take cover at specific areas or clear rooms for you. Taking cover behind walls or using a snake camera to peek under doors to see what’s awaiting you on the other side is imperative, as just barging your way through the game trying to run-n-gun will usually result in a speedy death, especially on harder difficulties. 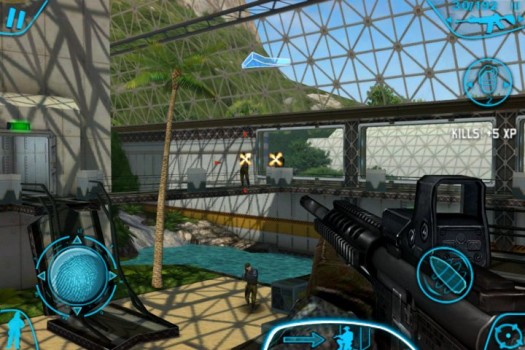 The online portion of Rainbow Six Shadow Vanguard is pretty good as well. It features online deathmatch or team deathmatch with up to 10 players spread across 5 specially designed multiplayer maps. There’s also an online cooperative mode that lets you team up with 2 other players and have a go at the single player campaign missions. This mode sounded extremely promising when it was announced, as there isn’t really anything akin to that on the iPhone yet. While it’s a technically sound mode, the lack of any sort of chat feature sucks the fun out of the experience. Playing cooperatively means being on the same page as your teammates, and without the ability to communicate with each other this mode loses almost all meaning.

Both the single player and multiplayer portions of Rainbow Six Shadow Vanguard let you earn experience for killing enemies which can then be used to unlock additional weapons and equipment. This is a nice touch and gives you more motivation besides just merely completing levels, though the extent of items and customization is lacking compared to something like Modern Combat 2 [$6.99/Lite/HD]. The graphics look quite good for the most part, though not mind blowing. It utilizes the same engine used in countless other Gameloft titles, giving it a somewhat generic look. Controls also work well though they can feel cramped on the tiny screen and there is very few options to suit them to your liking.

Overall, Rainbow Six Shadow Vanguard gets the job done. It’s not nearly as deep or strategic as the console titles it’s modeled after, but it feels similar enough that it should win over fans of the series or those looking for a more tactical FPS experience. The competitive online modes are very good, though not quite as strong as those found in N.O.V.A. 2 [$6.99/HD] or Modern Combat 2. The cooperative play may serve you well while playing locally with some friends so you can discuss tactics with each other, but playing this online is largely forgettable. Surprisingly, the campaign is actually the star of the show in Rainbow Six Shadow Vanguard, and is much more engaging than the campaigns in either of the previously mentioned titles.