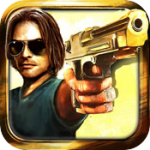 A little more than a month ago, iPhone giant Gameloft first announced a sequel to Gangstar: West Coast Hustle [$4.99 / Free / HD], an open-world crime game which we liked quite a bit in our review despite a few disappointments. Gangstar: Miami Vindication [$6.99] was released this evening, and while several of our annoyances from the first have been tweaked or massaged to be less problematic, there’s still a few things keeping Miami Vindication from being our favorite thug simulator.

Much like the original, Gangstar: Miami Vindication features a full city to explore, a wide variety of vehicles to steal, weapons ranging from baseball bats to flame throwers, and a heap of missions to complete. (75 to be exact.) The game plays exactly how you’d expect it to play if you’ve ever played a Grand Theft Auto or similar type of open world crime game. You can play through the series of missions which vary wildly from something as simple to going to a particular point in the city to stealing a specific car or even racing. Alternatively, you can just disregard the missions entirely and instead just drive around the city, stealing cars, running from the police, or really doing whatever you feel like doing. 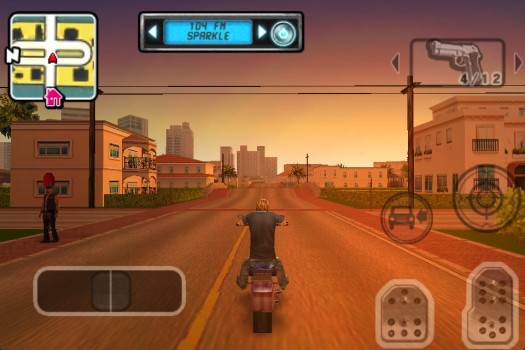 While there isn’t a whole lot of innovation to be found in Miami Vindication, it has been improved in some ways over the original. For instance, the game is fully voiced over and the voice acting actually seems to be a little better than your typical Gameloft game– at least for major characters. Gameloft also has been boasting the fact that the game was written in part by one of the writers from the TV show The Wire. This story consists of dabbling in the various sectors of the Miami criminal underground on the hunt for your missing brother. I don’t see it winning any awards, but by and large the dialog in Miami Hustle is substantially less cringeworthy than West Coast Hustle.

Controls seem to be a lot tighter than the original, offering three different options: Tilt, a virtual steering wheel, and a slider which I’ve found myself preferring. When on a motorcycle, tilting your device back and forth executes wheelies and stoppies although riding a wheelie for any length of time usually seems to result in a spectacular crash. Lighting is improved as well, resulting in some fairly spectacular views during sunset and sunrise as the entire city is bathed in warm sunlight. 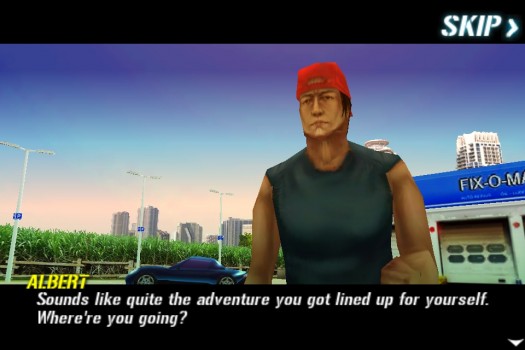 Unfortunately, even though the lighting is better, Miami Vindication is home to some heinously low polygon models. Cars look decent, but character models look absolutely dreadful. Animations are extremely limited, faces lack depth, there are no fingers to be found anywhere, and no lips move when anyone speaks. Instead, they just flail their arms about and bop their heads back and forth. With how much of the game is spent watching two characters talk to each other, this soon becomes incredibly distracting.

The draw distance is decent, but pop-in is considerable. You can see buildings and terrain from far away, but trees and other small details all appear incredibly close to your character. Much like the original Gangstar, the city of Miami in Miami Vindication is terribly barren. Only a few cars will ever appear on screen at once, and pedestrians are rare as can be. Everything feels entirely too clean and empty. Gameloft did implement some varied areas to the city instead of being totally metropolitan, but all the subareas all feel equally lonely and empty.

If you can get past the relatively sparse graphical environment, there really isn’t anything else like Miami Vindication on the App Store. Riding around on motorcycles and boats is a lot of fun, and if you can find a helicopter, flying around the city is really pretty cool. I still prefer Grand Theft Auto: Chinatown Wars [$9.99 / Free / HD], but if you don’t like the top-down view and want a full 3D experience, Gangstar: Miami Vindication is worth exploring.