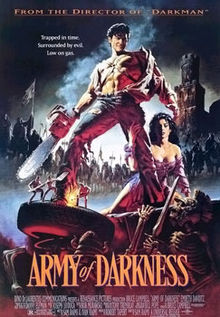 Buried in the Buganoids announcement email from Backflip Studios was this tiny little tidbit:

A game developed by us in tandem with MGM Studios based on the cult classic ARMY OF DARKNESS movie will launch early in 2011 . . . deadites beware!

That’s right! Army of Darkness the game is coming to the App Store in 2011.

Now, I know what you’re thinking… “a movie franchise game?" But Backflip’s Julian Farrior says the whole team is “insanely excited" about it and it’s collectively the team’s favorite movie. So, we’re going to mark this one as “can’t wait" for now.

The game will include all the favorite quotes from the movie and is described as a hybrid castle/tower defense inspired game. Your job is to protect the Necrinomicon from the Deadites with the help of your boomstick, chainsaw and more.

Here’s a great collection of many of the quotes, probably not entirely safe for work:


If you haven’t seen Army of Darkness, well, you’ve got time before the expected “early 2011" release.