One of the more interesting titles I got to see a demonstration of at Sega’s iPhone Games Day today was Kingdom Conquest. The game is attempting to blend aspects of MMOs, real-time strategies, card battling, and dungeon crawlers all in one combined online experience. It may sound like a tall order, but it appears that Sega is actually on their way to pulling off this unique idea.

The RTS part of the game has you building up a city by placing buildings and using resources much like you would set up a base camp in typical RTS fashion. Harnessing resources like stone, iron, and wood allow you to build up different structures with different purposes. You’ll also need to amass an army to capture territories of opponents. The different types of units you can use in your army are portrayed in a card-battling style similar to games like Magic the Gathering. Each card has its own attributes and special abilities, and there will be ways to earn unique cards to add to your collection. Winning in battle will depend on the effectiveness of the cards that comprise your army. 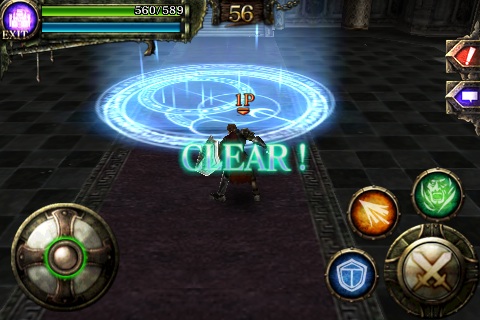 The dungeon crawling comes in to play when you try to take control of special towers around the map. Once you attempt completing a tower, the game switches into a 3rd person hack ‘n slash game controlled with an analog stick and buttons where you must complete 5 levels of a dungeon floor filled with enemies and a huge final boss. Beating a tower can net you special items and resources for use in your city, as well as new monster cards and experience points. There will be 3 types of characters to play as in this part of the game – a barbarian, a swordsman, and a cleric. These characters can be outfitted with various weapons and equipment, and can be leveled up as you progress in the game. 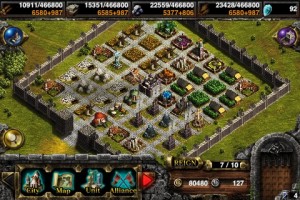 Finally, the MMO portion comes into play with the online components of the game. Kingdom Conquest requires an EDGE, 3G, or WiFi internet connection to play. You can view other players cities and face off against them in an effort to take over their territory. The online progress is persistent, and you can join with other players and form alliances as you play through a season in the game. You can join into online auctions with other players to trade and buy items, as well as send messages and check various online statistics and rankings. Additionally, the dungeon crawling portion of the game can be played with up to 4 other players cooperatively, similar to raiding in other MMO games. 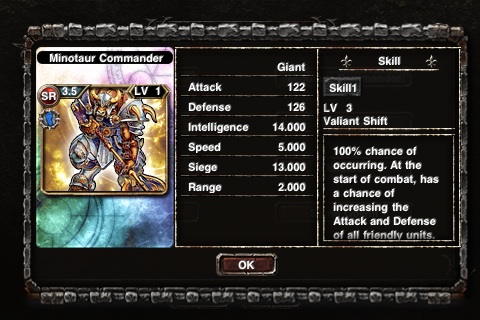 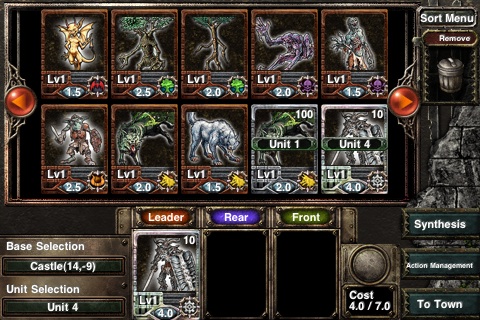 If this all sounds complicated, a “messenger” character in the game will give you various quests to complete that help you learn the different facets of playing before engaging in online battle. Kingdom Conquest will be a freemium title, which will be free to play but contain a shop full of various in-app purchases. These purchases can do things like increase your production, attack, or defense, as well as other offensive boosts. It remains to be seen how this will affect the balance of the game, and if spending more money will allow you to conquer players unfairly over those that choose not to spend anything. At any rate, the game looks great so far, and you’ll be able to try out Kingdom Conquest for yourself sometime late this fall.