Cut the Rope – Already drawing comparisons to the incredibly popular Angry Birds [99¢/Lite/HD], Cut the Rope is a new physics puzzle game developed by Zeptolab and being published by Chillingo. In the game, you’re tasked with feeding candy to a hungry little creature named Om Nom. For whatever reason, the candy is tied up by ropes, and you must cut each rope strategically in order to let it swing and fall (or sometimes rise) into Om Nom’s mouth. Hazards like spikes and spiders look to make feeding Om Nom even more difficult than just swinging the candy to his mouth, and bubbles can grab a hold of your candy and cause it to float away.

This game trailer gives a glimpse of the gameplay on offer in Cut the Rope:

There will be 100 levels in Cut the Rope, and each will be able to be played through quickly, but all the stars on each level must be collected if you intend to get the best score. Much like Angry Birds, it will be easy to keep retrying a level until you’ve achieved perfection. Expect a similar three star scoring system, as well as Chillingo’s Crystal service for achievement and leaderboard tracking. You can join in on the discussion of the game in our forums, and expect Cut the Rope to be hitting the App Store in the coming weeks. 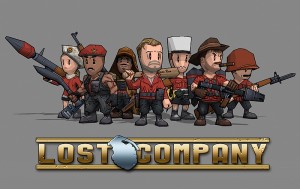 Lost Company – Announced at the beginning of July, Lost Company is a new tactical turn-based strategy game from developer Tome Studios. It’s an online multiplayer focused game, with a single player element that is designed to teach you how to play the game before battling it out online. The style is reminiscent of Team Fortress 2 meets Final Fantasy Tactics, and the art and character design is looking very nice so far. You’ll choose a team of five from the available unit types, which include a sniper, flamethrower, engineer, melee expert, and more. Winning matches unlocks new weapons, perks, and abilities for your units as you evolve and level up your persistent online profile. Matches will take place on various terrains that feature high grounds, half cover points, water, bridges, and other elements that add to the strategy of play.

This short video shows some of the tactics necessary in dealing with the terrain, and other gameplay videos can be found on the Tome Studios YouTube page:

One of the coolest things about Lost Company is that game data will be stored on the server side. The game will be universal for iPhone and iPad, and available on Mac OSX as well. So, if you start a game on your iPhone, you can then pick up in the same game where you left off later on your iPad or Mac. Lost Company is shooting for an October beta, with release to follow sometime thereafter. Once the server is up and running, you will be able to log in and create an account even before the game is available, earning an undisclosed in-game bonus for doing so. The developer is actively discussing the game with members in our forums, so be sure to check out the thread for a ton of concept art as well as details on how to log into the server when it goes live.