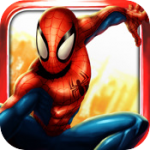 Games based on comic books have been almost as hit or miss as games based on movies in the past, so I think my cautious optimism for Gameloft’s recently released Spider-Man: Total Mayhem [$6.99] was well deserved. Sure, there are some absolutely fantastic comic book games such as the quarter-sucking X-Men Arcade Game, and a few others over the years. Unfortunately, many fall in to the same pit that movie games fall in to where they lean far too heavily on whatever intellectual property the game is based on instead of actually having good gameplay. This is true to some extent in Spider-Man: Total Mayhem, but the whole package is comprehensive enough that it doesn’t even seem to even matter. 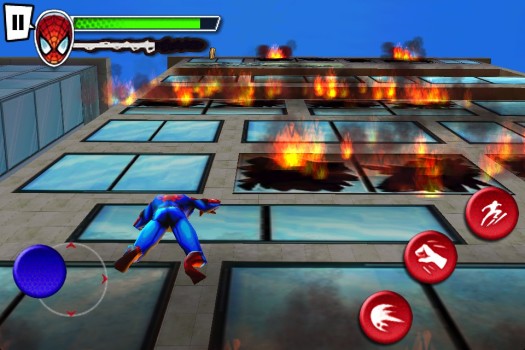 Like all Gameloft games, many parts of Spider-Man are clearly borrowed from other titles of theirs, and Total Mayhem is no different. A lot of the combat feels like a mix of James Cameron’s Avatar [$4.99 / Free / Free] and Iron Man 2 [$4.99 / Free / HD]. Spider-Man is host to the same wall climbing and rail sliding sections as nearly every other 3rd person action Gameloft game, and just like almost all of their other titles, the voice work is laughable at best and face palm worthy at worst. They even managed to sandwich the upgrade system from Hero of Sparta II [$6.99 / Free] in that nearly everything in the game drops orbs of various colors which are then used to upgrade Spider-Man’s various abilities.

What saves the whole game is that even though they recycle all these different elements, they seem to combine extremely well to create a game that just feels like a Spider-Man game should. There are endless thugs for you to bash, a heavy reliance on the spider sense, and a surprising array of extremely recognizable bosses that anyone who has read a Spider-Man comic or watched a Spider-Man cartoon will know. The levels included are fairly linear, but feature a great mix of fighting standard enemies, bashing mini-bosses, swinging around, climbing, and the varied events leading up to the boss encounter. 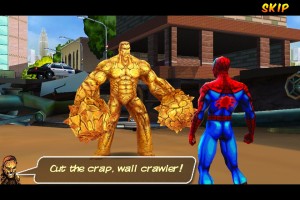 The combat system works well, and even though it feels a little button mashy at times, it’s a lot of fun to watch Spider-Man execute his combos filled with punching and web slinging. However, even fighting bosses is a little too easy because of how well the spider sense evasion system works. Whenever you’re fighting, when there’s an incoming attack you’re able to slam your thumb down on a virtual button that appears just to the left of the joystick. A successful button mash kicks the game in to slow motion, and Spidey evades the incoming blow and counter-attacks. It all flows together great, and these spider sense moves usually look really cool.

There’s a surprising amount of content in Spider-Man: Total Mayhem, including a hefty amount of unlockables to boost replay value. Twelve levels are included, and in each of the levels are tokens you can pick up to unlock bonus art to look at. In addition, there’s an “ultimate" difficulty to unlock as well as a boss rush mode. There’s even the black Spider-Man symbiote suit to unlock to play through the game again with Spidey powered up. Also, when fighting bosses you have opportunity to take photos of them, and these photo opportunities seem fairly easy to miss. If you’re a completionist, you will be playing through Spider-Man: Total Mayhem many times.

Total Mayhem is loaded with high resolution graphics that look absolutely fantastic on the iPhone 4. It’s not universal, but like most Gameloft games it wouldn’t surprise me if an iPad-specific HD release was on the horizon. Gameloft did a great job of making a game that plays like a Spider-Man game needs to. The spider sense seems entirely overpowered in combat, and it won’t take long for you to get tired of the spider sense quick action sequences that are liberally used in cut scenes, but beating up an endless array of nameless thugs is just as fun as it should be.