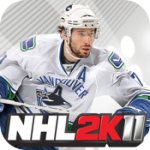 One of the most underrepresented sports on the App Store is ice hockey, which is perplexing as even if you aren’t really a fan of the sport itself, hockey has historically made for a fun video game. Back in early April we finally got an attempt at a real ice hockey game for the iPhone, Hockey Nations 2010 [$3.99/Lite]. While it looked and controlled fairly decently, it was missing that intangible aspect that made it a fun game to play. In what was somewhat of a surprise release, seasoned sports game developer 2K Sports has brought NHL 2K11 [$1.99/Lite] to the iPhone. While not the prettiest game around, it’s an absolute blast to play and features a full season mode, official NHL teams and players, and more options than you could ever possibly need in a portable hockey game.

NHL 2K11 controls similarly to Hockey Nations with an analog stick for player movement and three virtual buttons for performing actions. There are separate buttons for passing and shooting on offense, with the power of each determined by how long you hold the button down. On defense these same buttons serve to change players and perform checks. The third button gives your player a speed boost on offense or defense. Your actions can differ based on where you are in relation to other players allowing for simple poke checks or full blown body checks. Passing also works really well, letting you bounce the puck off the boards to a teammate or set up for a one-timer. The controls are really uncomplicated but still allow for depth and strategy. 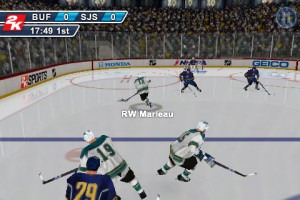 What is really impressive about NHL 2K11 is the absurd amount of options at your disposal. There’s typical game settings like difficulty, toggling penalties, choosing NHL or international style time and icing rules, and more. You can set line changes to automatic, manual, or turn them off completely. A ton of different camera angles and zoom options are available including locking the camera in place. A season mode lets you choose a team and play through an entire season in pursuit of the Stanley Cup. Rosters can be altered, saved, and loaded with or without a trade deadline and salary cap. What’s in NHL 2K11 is comparable to what you would find in a full console sports title, and caters well whether you’re looking for a casual hockey experience or something in-depth.

Even with all of the great features in NHL 2K11 it does have some shortcomings. Players are blocky and comprised of low resolution textures, which is pronounced when the game zooms in during replays. This isn’t as noticeable with the default overhead camera in the game, but the tiny players are still pretty jagged, especially on the iPhone 4. While the visuals are not the best, they don’t distract from the game too much as you can still tell what is going on, but they could stand to be better. The game description warns NHL 2K11 isn’t compatible with first gen devices, but players in our forums have been able to run the game, just with a lowered framerate. You can always try the lite to see how it performs if you have an older device. Additionally, the AI in the game doesn’t always make the smartest choices, and the audio portions of the game are lacking. Overall, NHL 2K11 has some “rough around the edges” spots, but overall none of these issues really diminish the fun of playing the game.

It wouldn’t be hard for NHL 2K11 to claim the title of best ice hockey game on the iPhone, since the competition is sorely lacking. But it surprisingly goes above and beyond and offers a truly full-fledged NHL experience on a mobile platform. Even with such a robust experience, the game supports fast app switching and saving during season play which makes it well suited for on-the-go gaming. And on top of everything else, it’s just incredibly fun to play. EA’s NHL offerings have typically been favored over the 2K series on consoles, and it will be interesting to see if EA decides to throw their hat into the iPhone hockey arena. Until that time, however, 2K Sports NHL 2K11 is the clear cut choice for hockey on the iPhone.