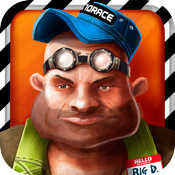 Craneball Studios is well known for providing us with apps that are just that little bit different to anything else out there. Their latest project to hit the App Store, Monorace [App Store] continues that tradition; a gravity-centric side-scrolling platform racer that takes takes one-touch gaming to a whole new place (or ‘pace’ for that matter).

Monorace pits you as one of three distinct drivers– Fat Big D, Skinny Gus and Hot Jane– of a giant mechanical wheel called a Monobike. The basic idea behind Monorace is straightforward– get to the finish line as quickly as you can and avoid going slow. Going slow is bad– it gets you stuck, it gets you minimal stars (which are needed to unlock further tracks), and ultimately, it gets you dead. 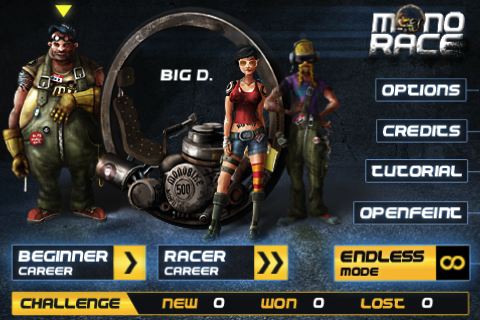 At the beginning of each level, your Monobike launches into full-throttle and never looks back– sticking to any surface it encounters but always moving forwards. Your job is limited to ensuring it always has somewhere to go, by avoiding obstacles and turning gravity on its head when the need calls for it. Gravity is pivitol in Monorace; as the entire world shifts on its head when you tap the screen, throwing its polarity upside-down. If you reach a ledge normally, you’ll drop down to the next level; if you’re racing upside-down, you’ll drop upwards to the next level. If you’re getting queasy already, don’t fret– it’s a whole lot easier in practice.

Another important feature to understand in Monorace is that slopes of any kind, be they upwards or downwards, will drastically slow your racer. The beginning tutorials make it clear that you are better off jumping mid-air down (or up) these chutes than touching the floors or cielings as they may be. Other obstacles are littered throughout the world which can also put the brakes on your racer. Spikes, pits, open-air gaps– these are all things that if not avoided, will end in your demise. Other obstacles like slow pads and jumpers (which force a polarity shift) can throw your speed and trajectory completely into disarray, whilst speed pads and time pickups are essential to getting the best laps. 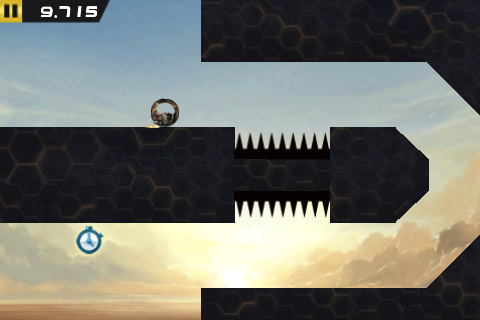 The menus and characters in Monorace look really slick, and though the characters don’t have any racing differences, their personalities and drawling over-the-top voice-overs lend a fun, tongue-in-cheek vibe. The levels themselves are blander in comparison; but when the game is paced as fast as it is, the lack of detail is not that noticeable. That said, I would have liked the detail of the menus to carry through to the rest of the game. 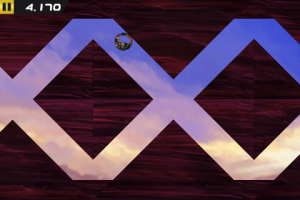 There are two career modes to choose from in Monorace, a Beginner career and a Racer career comprising 40 levels each. The former leniently scales the difficulty of its levels, whilst the latter throws you head-first into more mind-boggling and twitchy racing experiences. It often takes a couple of tries to get your head around certain sections of each race, particularly how the polarity shift will affect your headlong rush.

Supplementing the campaign mode in Monorace is also an Endless Mode which provides a randomly generated endless level in the same vein as the likes of Canabalt, scoring you based on how far you reach. Scoring in both modes is recorded by OpenFeint, which also niftily displays your friends scores in each level screen and lets you initiate Challenges, a feature that Monorace is obviously pushing users to make the most of, as your Challenge stats are displayed prominently on the main menu.

Monorace is a different kind of one-touch racer that provides some exhilarating but potentially frustrating gameplay, as repeat attempts can easily escalate into the dozens. In that respect (for better or worse) it reminded some of us a little of Squareball in feel. The career missions range from easy to outright gruelling, but the sheer number of them means completionists can be occupied for a long while. For those drawn to the topsy-turvy polarity shifting and break-neck pace of Monorace; a challenging, mind-bending racer awaits.

Be sure to check out the hilarious trailer above too, and pop into our Monorace thread to see what our readers are saying.