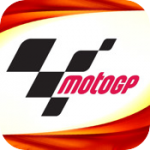 When it comes to racing leagues, MotoGP is to motorcycle racing what NASCAR is to stock car racing and IRL is to indy car racing. It’s the premiere league for street racing of the two-wheeled variety, and has a fairly long history as a video game franchise. The MotoGP series of games are known for being something of a hybrid of simulation and arcade racing, and this still rings true with the release of MotoGP 2010 for iPhone. The iPhone version of the game, however, really doesn’t impress much visually, and there are several quirks that keep it from being a very good racer.

MotoGP 2010 features a Championship mode as its main single player component, and this takes you through the 18 official events of the real MotoGP season. Also, there are licensed bikes and riders to use in the game, so you can live out your dream of racing through a season of MotoGP just like in real life. This is about where the simulation portion of the game ends, though. Racing in MotoGP 2010 is strictly of the arcade variety. Turning is handled with tilt, and acceleration is automatic. Touching the lower right corner of the screen activates a limited boost, and the lower left corner is the brake. Besides a brake assist indicator that tells you when to brake as you approach a curve (which can be toggled on/off), there are no other control options available. 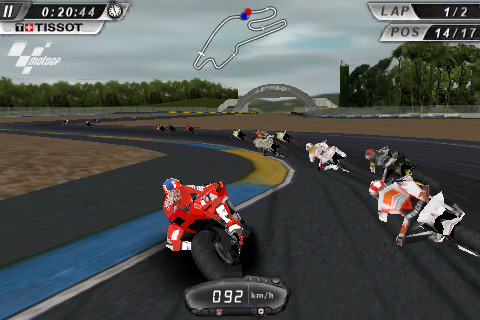 Racing boils down to boosting as much as possible without overheating while slowing to almost a stop for just about every curve. Running off the course doesn’t really affect you very much, as you can just boost your way back onto the pavement. It’s also impossible to crash into walls or other riders and fall off your bike. The courses themselves are well designed and interesting, mostly because they are based on real tracks, but racing on them feels pretty mediocre. Not terrible, just not very exciting. Like the gameplay, the graphics are pretty average as well. Jagged edges abound, and the game has a grainy overall look. Performance isn’t the best either, as regularly the game would drop frames and stutter along during a race on my iPhone 4.

Even with all that, once I came to grips with the weird handling of the bikes, I did find myself having some fun with the game. It will take a good amount of play time to make it through the season, and each event has a qualifying race you can choose to participate in to get a feel of the track and earn a higher pole position before actually competing, which I thought was a nice touch. There’s also a number of achievements and unlockable gallery art to be earned through play. MotoGP 2010 isn’t the worst racing game that I’ve played on iPhone, but it’s far from the best.