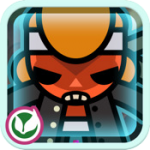 If you’re in the mood to indulge in something completely off the wall crazy, then you’re in for a treat. Meow Meow Happy Fight [99¢] is a new dual stick shooter with an incredibly wacky Japanese style. Before you bemoan the existence of yet another dual stick shooter, this one actually throws some novel ideas into the mix to set itself apart from the pack. Oh, and did I mention you get to play as a cup of noodles? If that’s not a selling point of the game, then I don’t know what is. With multiple stages to play, a slew of diverse characters to unlock, and colorful graphics with a unique style, Meow Meow Happy Fight will bring happiness and destruction to your iPhone.

Happy Cat comes from the future, where everything is just too darn happy. He travels back in time to the present day to encourage the characters in the game to battle each other, and take the future happiness down a notch. While Happy Fight functions like most traditional dual stick shooters (left stick for movement and right stick for firing), rather than fighting off hordes of enemies in a survival marathon you’ll be directly battling the other characters in the game deathmatch style. Each of the 24 levels in the game has you fighting against multiple opponents, and the character who has the most kills when the match time runs out wins. 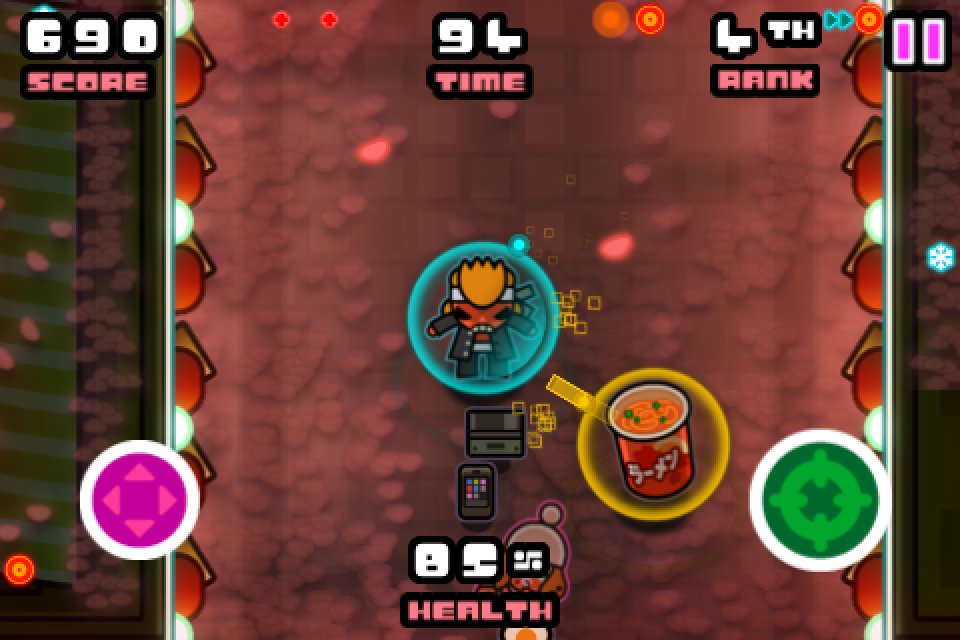 There’s 15 different characters in the game, including a hamster in a ball, a vending machine, and of course a cup of noodles. Defeating enemies causes them to drop a number of different happy pickups, which are just as odd as the characters themselves and include various food items, toiletries, and designer fashion accessories. It truly is bizarre, but in a good way. Some of these items will replenish a small portion of your health, and others contribute to your total of Happy Points at the end of a match, which act as the currency in the game for purchasing and unlocking additional characters.

The arenas in Happy Fight are all locations around Tokyo, and provide relatively small but adequate quarters to engage in battle. Each new location must be unlocked by coming in first place in the previous one, and they get progressively harder as you go. A number of cool powerups also begin to appear as you make your way through the game, and the arenas have interactive elements like teleports and explosive barrels to add strategic variety. Icons at the edges of the screen point you towards enemies and powerups, and battles are fast and action packed as you search out opponents to destroy or scramble to pick up a health pack as you’re on the edge of death. It really is a lot of fun.

The one negative aspect of Happy Fight that sticks out to me is that you can only play against computer controlled opponents. This game is just screaming for some online play against real live human opponents, but sadly this is not the case. The AI is very good though, and the game is still a lot of fun, but I can only imagine how much better it could be with some sort of online multiplayer component. Still, it will take you a good amount of time to beat all of the games levels, and unlock every character. Plus there is OpenFeint integration for leaderboards and achievements, as well as some detailed stat tracking.

This is the first dual stick shooter in a while that’s been entertaining enough to hold my interest, as the gameplay is fast-paced and the style is the most absurd I’ve seen since MUST.EAT.BIRDS. [99¢/Lite]. Players are loving the game in our forums, and the developers are there answering questions and collecting feedback on ways to improve the game. If you’re looking for something that feels familiar but adds some interesting new twists, check out Meow Meow Happy Fight right meow.