RatRod Studio, the creators of Mike V: Do or Die [$2.99] recently released their second game on the App Store. Drift Mania Championship [99¢], as the title would imply, is a racing game that emphasizes on drifting. If you’ve never played a game that requires drifting, or have never been an irresponsible freshly-licensed teenager behind the wheel of a car in an empty wet or snow covered parking lot, drifting is intentionally oversteering your car to lose traction in your rear wheels while going around a corner. When performed well, this results in awesome sideways sliding at high speed, or, when done poorly, ends in an embarrassing spinout. 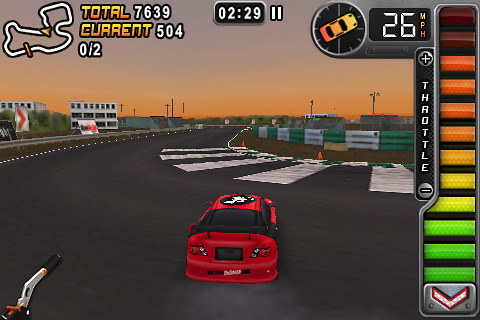 Drift Mania Championship combines so many great things in to one racing game that I can hardly believe they’re selling it at 99¢. Everything from collaborating with the DMCC Drift League, licensed music, a great physics engine, replays, online leaderboards, as well as multiple cars, difficulties, tracks, and a really well-done control system, makes picking up Drift Mania Championship should be a no-brainer to anyone interested in racing games.

Part of drifting any car, either in a video game or in real life, involves accurate control of your car’s speed. Drift Mania Championship accomplishes this with a clever control setup where you steer your car by tilting, and control the accelerator by sliding your thumb up and down the right side of the screen. The lower left corner is home to a button to pull your car’s hand brake, and keeping control of your car while maintaining speed and sliding sideways requires precise use of both. On your first race there is a brief tutorial that you read through that teaches you how to drift, and while it would be nice to have something a little more interactive, it does the trick. If you find yourself spinning out too often, just take it slow until you get a hang of exactly how much you need to steer in to turns to not lose control. 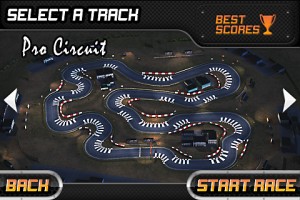 Three tracks are included along with three difficulty levels hidden away in the options. One car is unlocked initially, with an additional car unlocked for finishing first on each track as well as a fifth car for finishing first in all three tracks. Placement in the races is determined by your total score which seems to be computed by how long your drifts and how fast you’re going with bonuses offered for style, chaining drifts together, and other things. At the end of each race you’re shown a replay that highlights your best drifts, and you’re given the opportunity to upload your score to the global leader boards which already seem to be loaded with scores that I’ll never be able to beat.

The current down side to Drift Mania Championship is that while it’s being sold as a universal game, it seems to be entirely broken on the iPad. As with the recent Trism update, Drift Mania Championship attempts to run at the native iPad resolution, but all the interface elements are out of whack which makes you unable to play the game. The game being released as universal seems to be unintentional, as the game’s FAQ mentions a separate HD version being released later. Needless to say, if you plan on playing this game on your iPad, I’d avoid it for now.

If you don’t care about the current lack of iPad compatibility, Drift Mania Championship is one of the better games I’ve played that rely on drifting your car around. The controls are great, and while it would be nice to have more than three tracks, there could be a sizable amount of replay value through unlocking all the cars and competing in the online leaderboards. Aside from the iPad issues, people on our forums are really enjoying the game, and as long as you plan on only playing it on your iPod touch or iPhone, Drift Mania Championship isn’t hard to recommend, especially for 99¢.