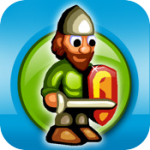 One of our favorite developers, Donut Games, has just released a huge free update to their game Castle Smasher that adds more than ten times the original content. Released over a year ago, Castle Smasher was just the second title from Donut Games to grace the App Store. The concept involves launching stones at a castle in order to slowly demolish it bit by bit, setting the angle and power of your catapult shot before letting it fly. Think Angry Birds with a little Breakout thrown in and you get an idea of the gameplay, although Castle Smasher predates Angry Birds by a long shot. There were 5 different castles to smash, but due to the arcade-like aspect of having to start from the beginning each time you ran out of stones it was difficult to ever see all 5, and the first couple grew tiresome after having to play them over repeatedly. Essentially, it lacked some of the thoughtful design of the later Donut Games.

Now Castle Smasher has been given an update that brings it more in line with what you might expect. Rather than releasing a separate sequel, 50 brand new levels have been added that include the wonderful 3 star achievement system Donut Games is known for. New elements like extra bouncy or flaming stones and additional enemy types lend some variation to the smashing of castles. These 50 levels are incredibly well designed and fun. The original game remains intact, appropriately titled Arcade Play, and there’s even a randomly generated Target Practice mode thrown in for good measure.

The Target Practice could easily be its own game, and when I had merely just wanted to check out what it was like, I was surprised to find I had blown almost an hour playing it. Castle Smasher was relatively enjoyable to begin with, but the 2.0 update has pushed it amongst the elite of Donut Games and is highly recommended.