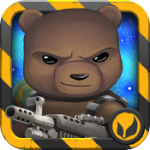 Battle Bears -1 is the follow-up prequel to last years incredibly popular Battle Bears: Zombies! If you aren’t familiar with the first Battle Bears game, you play the role of Oliver the bear, stranded and forced to fight back against near-endless waves of adorable pink bears (called huggables) that want nothing more than to hug the life out of him. An assortment of clever weaponry was at your disposal to battle against this pink menace. The gameplay wasn’t bad, but it was the hilariously bizarre storyline and cutscenes that really made the game a hit, which we highlighted in our review.

Now, Battle Bears -1 takes the storyline a step backwards while taking the gameplay a step forwards, alleviating Oliver from his stationary position and allowing him full mobility in a third-person shooter. Battle Bears -1 succeeds in emulating the formula of it’s precursor, offering satisfying – if not groundbreaking – shooting action that is drenched in undeniably appealing visuals, humor, and pop culture references. A couple of minor issues plague this initial version, but whether you are a fan of the first game or are new to the series, Battle Bears -1 is a ride that’s well worth taking. 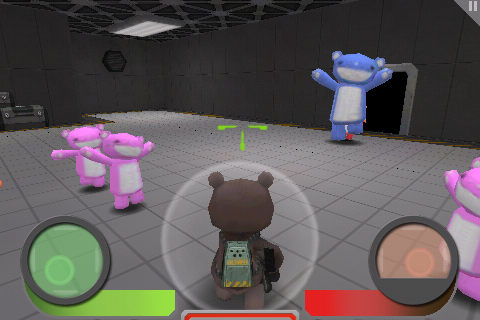 Since this is a prequel, the game’s story sets up the events for Battle Bears: Zombies! The Battle Bears crew are on their spaceship Ursa Major transporting a batch of mystical treasures when hundreds of pink bears begin invading the ship. The main campaign that comes loaded with Battle Bears -1 has you again playing Oliver as he traverses through progressively more difficult rooms of huggables, with each room needing to be cleared before moving onto the next. Sadly, there’s not the arsenal of awesome weapons we saw in the first game, rather you’re limited to the default machine gun, a spread shot, or a rocket launcher. They’re still fun to use and pack quite a punch, just don’t match the intensity of the Unicorn Crossbow or Swear-a-phone. Huggables come in different sizes, colors, and attack types and there can literally be dozens of them swarming you inside a room at once. The amount of carnage on screen as you hurl rockets at a swarm of brightly colored bears can hardly be described, and the action in Battle Bears -1 is intense. 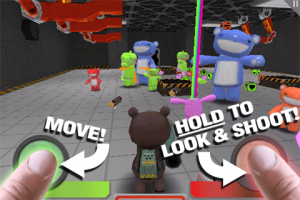 A dual-stick setup is the default control scheme, with the left stick for moving and the right for aiming and firing. Like just about every dual-stick shooter, the right stick fires continuously while you move, lest you press a small “Safety” button to toggle weapon fire on or off. This can prove slightly frustrating to manage in the heat of battle, and you often end up wasting ammunition just trying to orient your view. An alternate control scheme allows for aiming by dragging on the screen but still suffers from the same auto-firing problem as the first does. You get used to it to a certain extent, and it doesn’t ruin the enjoyment of the game, but it’s not ideal. A very handy mini-map can easily be pulled down from the top left of the screen and shows you where you’re at in relation to the endpoint. The graphics of the ship’s interior tend to be repetitive, but the actual floor layouts are varied and well designed. The placement of walls and bottomless pits in the rooms force you to use different strategies dealing with the constantly swarming huggables. Each new room is like it’s own unique battle arena, and despite the redundant decoration they are all really fun.

Once you’ve reached the end of the campaign a frantic boss fight awaits. The boss fights are really imaginative and epic in scale. After the boss is defeated, you’re treated to a final cutscene that transitions into the beginning of Battle Bears: Zombies! In addition to the default Oliver campaign a DLC campaign can be purchased for resident Battle Bears tough-guy Riggs for 99¢. Riggs plays a bit differently, being taller and slower than Oliver but more powerful. A different end boss and cutscenes accompany this new campaign, and it’s nice that the folks at SkyVu give player’s the option of how much game they choose to buy. Additional DLC campaigns are planned for the future, and all the different campaigns will be receiving free content updates. Besides each character’s campaign, there’s also a mode where you can challenge a previously beaten boss or a survival mode. The survival mode is practically a complete game by itself, offering a slightly different play experience with prize and money drops to add to your final score as you fight through an endless supply of huggable infested rooms.

Even with the complaints I have in the game – odd controls, lack of weapon and environment variety, high level of difficulty – overall I enjoyed Battle Bears -1. The humor is there, and the third-person shooting is actually very satisfying. It just feels very “version 1.0”, mostly because it is. Battle Bears: Zombies! started in a similar fashion, and over time blossomed into a very robust package for an iPhone game. Hopefully, the same will happen to Battle Bears -1 over the coming months, as the foundations are already solidly in place. Feedback is being collected in the game’s forum thread and the issues brought up here are already on their way to being addressed.