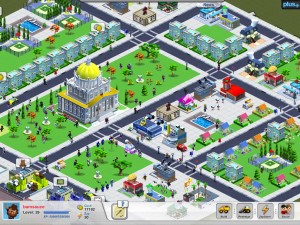 We City – In a similar vein of ngmoco’s previously released We Rule, We City takes things into a modern metropolis setting. You’ll build up your own city placing streets, sidewalks, grass, buildings, cars and citizens anywhere you like on the blank land canvas. While the look of the game may invoke thoughts of SimCity, the focus on We City is more on industrial production and interacting with friends, rather than trying to manage the ins and outs of a functioning city. For example, you may build a bicycle factory in your city. Over time, you’ll start producing the bicycles and end up with a nice supply. Your friend can then visit your city from their game and place an order for some bicycles from your factory. The end result is your buddy gets some bikes, you get some cash, and you both get some experience for the effort. There are a ton of different items to build in factories, like clothing, toys, and even video games.

You must keep a mindful eye on such things, however, as some items are perishable and will go bad if you don’t check in on your city often enough. In our demo of the game, we witnessed a factory full of bicycles become rusty and useless due to neglect, forcing you to start over in the production process. In addition to factories, you can also build residences where the populace of your city can dwell. These will generate money for you, but like the factories, must be checked in on to reap all the benefits. Once a certain rent cap has been hit, the buildings won’t generate any more money until that amount has been collected by simply touching a bubble above the building.

As you gain more experience and level up, new factories and items become available, as well as an increase in your land size. There’s plenty of items that are merely décor, too, to add some life to your city. The game will be free to download and play, but if you don’t want to wait around to bear the fruits of your factories, you can purchase in-game DLC, called ZAP, that will help speed up the process of doing things. 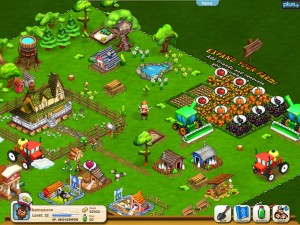 We Farm – Taking the same basic core concepts of We City and We Rule, We Farm let’s you build the virtual farm of your dreams. You’ll start off with a plot of land and place your initial farm building. Instead of focusing on the production of bikes and game systems, you will grow crops to sell and raise animals to enter into competitions. Once you’ve placed a baby animal on your farm, you must continuously love it by touching a heart icon above it’s head. The more you love your animal, the higher chance it has of winning a blue ribbon in competition when it’s finally matured enough to enter into one. If you send your animal off and it does win a blue ribbon, that animal then produces a commodity that will earn you some income. For example, and award winning sheep will net you some sweaters, and a cow some milk, etc.

Like We City, and most of ngmoco’s games for that matter, We Farm encourages being social with your Plus+ friends. They can visit your farm and place orders for the products of your animals or the vegetables that you grow. You must also keep a watchful eye on everything here too, as your crops can go bad if you don’t care for them. Animals won’t perish if you forget to check in, but the chances of winning a ribbon at the Fair decreases the more you ignore them. Much like Zap in We City, you can purchase DLC to speed up the process of maturing plants and animals (called GRO here). If you don’t wish to do this, both games are completely playable right from the get go – you’ll just need added patience. As you earn experience and gold, many new items become available to add to your farm, as well as expanded land to build upon.

Both We City and We Farm looked especially nice on the iPad, and the added screen real estate really helps once you’ve built up a massive area. Like We Rule, both new games will be free to play, so easy enough to check out if these sort of games interest you. Both games are expected later this year.