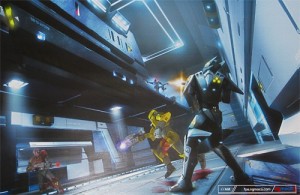 From the same team at ngmoco that brought us the groundbreaking Eliminate Pro, comes their next next first-person shooter. The currently untitled game is set in a present day environment and the action is more heavily grounded in realism than that of its futuristic predecessor. No graphics or artwork has been released yet (embedded image is promotional art for the original Eliminate).

Maps will run the usual gamut of jungle, desert, snow, or city, and it will feature 6 player deathmatch or team deathmatch over 3G and WiFi. Rather than focusing on the player unlocking and choosing different weapons for one character to use in the game, the new game will feature a robust lineup of different weapon class specialists. The ‘energized suit’ mechanic is also giving way to an interesting – although unproven – system where you queue up what type of mission you want to play, and earn credit based on the level of that mission. It’s an intriguing idea, and a welcome change from the energy system in Eliminate, but it remains to be seen how this design choice will fare once unleashed on the masses. One thing I can say for certain, however, is that during my time playing the game, the only thing on my mind was the superb FPS gameplay I was experiencing.

Even in this work-in-progress state, the game is shaping up to be a big step above what Eliminate Pro delivered last year. A staggering 76 different soldiers (read classes) are planned for release, featuring specialists in long range, short range, explosives, and more. Each soldier will have individual statistics and bear arms from an assortment of roughly 20 different weapons. Grenades are now a part of the arsenal and can be lobbed with a simple press of an icon. Auto-firing has been refined, and now features two aiming reticules on screen – a large circle in the middle of the screen with a smaller circle in the center of that. When an enemy is in the sight of the larger circle, you weapon will start firing, although with much less precision. Once you’ve adjusted your aim to have the inner circle directed on the target, the bullets are much more accurate. The outer circle can vary in size, and therefore accuracy, based on what weapon you’re using. It’s a good compromise that allows for the ease of auto-fire but still demands you be able to aim precisely for best results. Auto-fire can be turned off entirely if you wish, and firing defaults to the familiar ‘double-tap to fire’ control found in Eliminate.

As mentioned, the queueing of missions replaces the need for energy. You’ll choose from an assortment of gametypes to play, all of which have some sort of wait time associated before becoming active. The missions that take longer to activate will net you the most experience, and if you so desire you can use in-app purchasing to buy ‘Intel’ that makes the missions initiate more quickly. The system sounded incredibly odd to me at first, but made some sense as it sunk in. If you have somewhere to be for a set amount of hours, like a job or school, then you can just queue up a match or two prior to that and look forward to being rewarded with playtime once you’ve fulfilled your real life obligations. If waiting around or paying to play isn’t your thing, there’s the option to jump into matches immediately, although with lesser rewards. Much like Eliminate, it seems there’s the possibility of exploiting this if you’re willing to pay money and upgrade quicker, although I’ll reserve final judgment until I’ve played the finished product.

When you get fragged in a match, you’ll have the option of selecting what class to start your next life as. As you level up in the game, more slots and soldier classes become available for you to choose from. The game requires you to be online to play, even in the single player bot mode, so if you’re an iPod touch user with limited access to WiFi there won’t be much of interest for you in this game. During our 6 player deathmatch with the developers, the game ran silky smooth and I felt right at home from all my experience playing Eliminate Pro. The two games control nearly identical, and the graphics of the modern settings were definitely impressive. Post game screens include a bevy of statistics, and it’s incredibly simple to add recent players to your friend list for future matches. Players will be ranked accordingly, but this will likely remain behind the scenes to avert any predisposed notions before heading into a match with a higher ranked player. Possible mission queueing and ranking issues aside, we’ll be anxiously awaiting the release of their next FPS sometime this year.