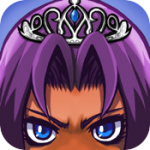 The 2D side-scrolling brawler is a fairly popular genre on the App Store, with games like OMG Pirates!, The Simpsons Arcade, and most recently Pride and Prejudice and Zombies bringing arcade-style action to our touch screens. Adding another solid entry to the list is a collaborative effort from developers UltiZen and MoStar called Princess Fury. We previewed the game just a few days ago, and were impressed with the visual style and the idea of adding strategic elements to what is typically a simplistic button-mashing genre. With Princess Fury now available, we’re happy to say that it has largely succeeded in bringing a new take to a tried and true formula, but doesn’t delve deeply enough into the strategic areas and has a frustratingly imbalanced pace. It remains a graphically appealing experience that’s chock full of action, and will reward players who are prepared to endure its faults.

You play as a young purple-haired Princess, wielding a sword larger than your entire body, laying waste to enemies across 20 different stages. Each stage is broken down into multiple sub-stages, and instead of being structured with a beginning and an end like most games of this type the levels in Princess Fury are more along the lines of elongated arenas. The goal of each sub-stage can vary, and this is what really sets it apart from your average brawler. Some challenges are as simple as defeating every enemy, or killing a boss. But others mix things up nicely. You might have to escort a character from one side of the level to the other, while fighting off enemy attacks and keeping that character alive. A similar version of this task gives you a stationary crystal which you must defend and keep alive for a predetermined amount of time. 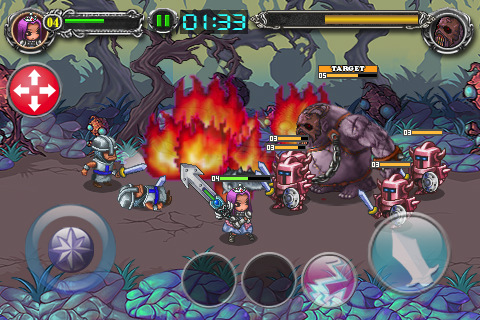 My favorite of these challenges works similarly to a territories game type. Five crystals are spread evenly across the map. Your group starts on one side, and a group of enemies on the other. Emptying each crystal’s life meter “owns” it for your team. The enemies can also control crystals, and it’s a fight to see who can own all 5 at the same time. It can become a pretty heated battle as crystals are constantly changing ownership. This game type in particular really is a lot of fun, but all the different game variations work well and add welcome variety to the beat ’em up style genre.

The other big wrinkle in the traditional gameplay is the addition of a leveling system and computer controlled allies that fight alongside the Princess. You gain experience while playing, even if you die and fail a mission. Unfortunately, there’s no type of meter letting you know when you’ll level up next, it just sort of happens. As you level up, more troops become available to you, up to a total of 8. There’s various types of soldiers, like archers or swordsman, that you can configure in your party and are able to earn experience and level up as well. You can decide whether your group sticks with the Princess and protects her, or acts more aggressively and searches out enemies on their own. This is about the extent of the real-time strategy the game boasts about, and while not adding a tremendous impact on the gameplay it’s a fun little addition. 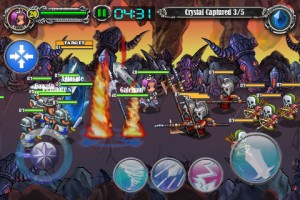 The Princess is naturally much stronger than any of her supporting crew, and she is capable of some unique magical attacks in addition to her humongous and powerful sword. New attacks are unlocked as you level up, and you can have up to 3 active at a time while playing. They range from raining down lightning to throwing tornadoes to advanced techniques using your sword. Each one takes time to recharge in between uses. There can be a ton of enemies onscreen at once, which can be good and bad. It’s good because there’s always a lot of action happening, but can slow the framerate down some on older devices. Also, your character can get lost amongst that huge crowd, and sometimes you don’t get a good view of what’s going on. These are pretty minor issues though, and in general the combat gameplay is really fun.

Where the road starts to get bumpy is in terms of balance. The game gives you a helpful tip that there’s the option of replaying any level for additional XP, but essentially this is required. Even the boss of the very first stage is too hard to defeat without replaying some of the levels you just played in order to level up your characters more. In some instances this can simply be due to you not utilizing the proper strategy for a level. For example, during an escort mission you may want to forge ahead and dispatch of any threats that lay waiting. And sometimes you’ll want to stick with the person being escorted, and defeat enemies as they come to you. But the majority of the time if you can’t beat a level it’s due to an unfair difficulty. The enemies level scales along with yours, making the inconsistent difficulty all the more annoying.

Still, for most people the good will outweigh the bad, and Princess Fury packs quite a punch for just a couple of dollars. There’s a ton of levels, attacks to learn, and soldiers to add to your party making for a unique twist on the typical brawler gameplay. There’s also something to be said for dishing out a world of hurt as an adorable Princess. If you’re looking for a game with a lot of action that’s likely going to last you quite a while, give Princess Fury a look.