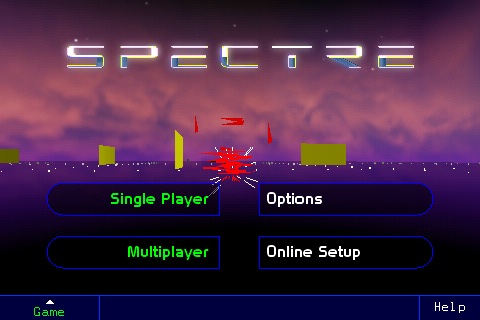 Back in the early ’90s when I was in college, with some sorrow I replaced my lovely Amiga 2000 with a Mac LC in order to crank out higher quality print documents for my classwork. And, in that capacity, the Mac excelled. Sadly, as the weakest color Macintosh one could buy, it was not much of a game machine — not that there were that many Mac games out there to play, anyhow. One game, however, was huge fun and played rather well even on the meager LC. It eased my pain at having to part with the veritable gaming powerhouse that was the Amiga. The game I speak of is Spectre, by Peninsula Gameworks, and it actually made that little LC feel like a proper game machine. 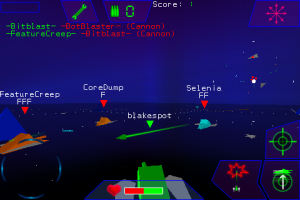 Spectre is a 3D, filled-vector tank battle game something akin to Battlezone. The simple objective was to drive your tank around various obstacle-filled battlefields collecting flags and dodging the fire of AI enemy vehicles. The game also supported local multiplayer over the Mac’s integrated AppleTalk networking hardware. It was followed by Spectre VR, an overall enhanced, network-centric title. Both versions were highly rated at the time and were awesome to play on the Mac’s relatively high resolution, color display.

As a lover of that 1991 title — pretty much the only game I played on that Mac — you can imagine my thrill when Spectre 3D [link] made its debut in the App Store. And the iPhone release is not just a port of Spectre; the game includes iPhone versions of both Spectre and Spectre VR, including four different multiplayer games. It’s pretty much an old Spectre jockey’s dream come true. 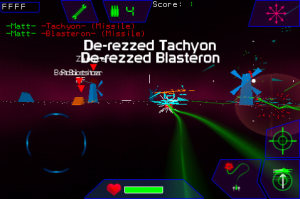 Let’s start with the single player scenarios. Both Spectre and Spectre VR are pretty much straight conversions of the Mac originals, although on the iPhone they play glass-smooth thanks to the device’s processor and graphics hardware, both of which are far more powerful than that found on even the very highest end Mac systems of the day. (There’s even anaglyph 3D — red / blue glasses — support.) You move from battlefield to battlefield, collecting flags and power-ups and blasting enemies using one of three different view modes: first person, over-the-shoulder, and 2D top-down. Direction and weapons are controlled via touch; steering is accomplished with either an analog virtual stick (default) or a digital control square in the lower-left corner of the screen while weapons and jump are controller by virtual buttons at the lower-right. The controls, analog in particular, are responsive and work quite well. It’s simple but a lot of fun, especially for those who remember the days of 68020 and 68030 Macs. 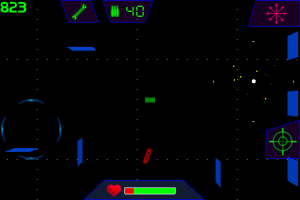 In the multiplayer modes, things really start to get interesting. As I mentioned, there are four multiplayer games: Arena, Capture the Flag, Flag Rally, and Base Raid. Up to four players can compete locally via Bluetooth and up to 16 players can get in on the fun over the Internet or local WiFi. The game has just hit the App Store and, as such, there are not that many players online — no surprise. But I was happy to see that most of the game servers available feature AI bots that offer up a rather solid online game experience. The action gets downright frantic. It’s Spectre as I never saw it back in ’91 — pretty “white knuckle," really.

As I said earlier, Spectre 3D is an absolute instant buy for anyone who enjoyed the title back in the day. And, while it doesn’t steal the crown from Vector Tanks Extreme for the ultimate iPhone Battlezone experience, Spectre 3D has multiplayer support going for it, and is a good deal of fun. I hope to see kill you online sometime soon.