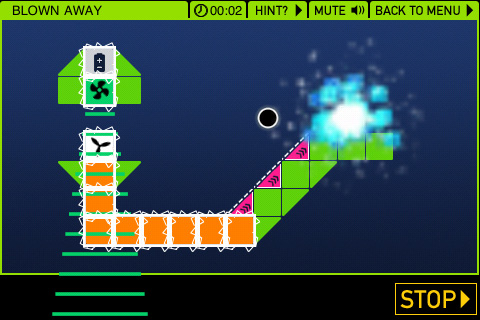 The Science Museum of London originally released Launchball as a Flash-based game in 2007. The Flash version has seen a strong following with over 2 million plays and has now been ported to the iPhone. The Flash version can still be played online.

Launchball is a physics puzzler where you need to get a ball from Point A to Point B using the tools at hand. These tools include fans, magnets, tesla coils, bunsen burners and much more. Each tool is introduced in sequential fashion during the introductory levels and in general feels much more accessible than similar games we’ve played. Once you set up the board as you want, you can press “start" to set the scene in motion to see if you’ve succeeded.

The game comes bundled with 6 tutorial levels and 36 real levels, but also offers a fully featured level editor with online integration. This means you can create your own levels and download the creations of others.

Overall, a fun physics puzzler that offers a surprisingly robust level editor/sharing system that could extend gameplay infinitely. Give the Flash version a try, the iPhone version plays identically.