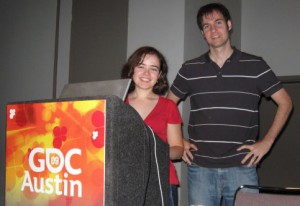 Day two of the Game Developers Conference in Austin, TX began with a talk by husband and wife duo Keith Shepherd and Natalia Luckyanova of Imangi Studios. Keith began the talk detailing the history of Imangi and how they approach making iPhone games.

Imangi Studios was founded in June 2008, based in Washington DC and neither Keith or Natalia had any kind of game industry background. The App Store created a market that would allow Imangi Studios to create low cost high quality casual games, and now have over half a million downloads across their five games on the App Store. Their most popular game Harbor Master [$0.99] reached a peak rank of #3 in Top Paid Apps with over 11,000 sales in one day.

When Imangi Studios makes games, they start with paper brain storming in notebooks filled with sketches and other ideas. The hardest part is determining of those ideas what is going to be the most enjoyable for everyone (including themselves) to play and of course using a concept that has wide appeal is important to appealing to the large casual user base.

Like many iPhone developers, Imangi puts lots of emphasis on making sure games that are extremely intuitive, take advantage of the unique iPhone features, and with a good balance of a game experience that allows you to play for a few minutes at a time or a few hours at a time.

Natalia then took over the presentation to discuss their marketing and promotion. Imangi spends 40-50% of their time marketing their products, but Imangi has never used a publisher because they want to build their own brand, and they’ve never used a PR firm because their marketing budget is nonexistent. Putting great importance on the launch of games, Imangi focuses most of their marketing efforts on the initial release of the game to have the biggest rush out the door.

Marketing goals for the release of their games is creating a great community buzz and getting listed in the New Releases on iTunes. Obviously, getting on the top 100 is important because that’s where most of the eyes on the App Store are. Positive reviews on sites and iTunes are also important.

The App Store is an incredibly indie friendly market place, with your small company size and low overhead you can experiment and react quickly to what happens in the market. You can also built relationships with players, something that has really never happened with big studios in the past before the iPhone.