A few of days ago we posted our first impressions of Tiger Woods PGA Tour [App Store] from Electronic Arts.  Since then, we’ve spent more time putting around this latest installment in EA’s 11 year old golf franchise and can provide further reactions. 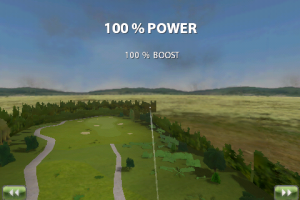 As mentioned in our previous post, Tiger Woods PGA Tour is a golf game of the realistic, simulation sort as opposed to the more casual golf titles, such as one can readily find on the Nintendo Wii platform.  If realism, as opposed to bouncy music, rainbow colors, and enlarged heads is your thing, then you’re in EA’s target audience on this one.  (And that’s not to say that the more festive variety of golf titles are to be discounted — we love Gameloft’s Let’s Golf, for instance.)

Tiger Woods PGA Tour lets you create your own players and customize them through attributes such as sex, skin color, and color and style of attire.  The game tracks deep performance statistics and course records for each player, which can be browsed in the Options area.  In the game’s Play Now mode, you can choose to take the role of any of your own characters, or to choose from the on-board big names: Tiger Woods (surprise!), Vijay Singh, Retief Goosen, or Annika Sorenstam.  In this mode, up to four players (you and three AI opponents) compete for top spot on the leaderboard.  There is also a PGA Tour mode where your character strives to emerge the best of the best. 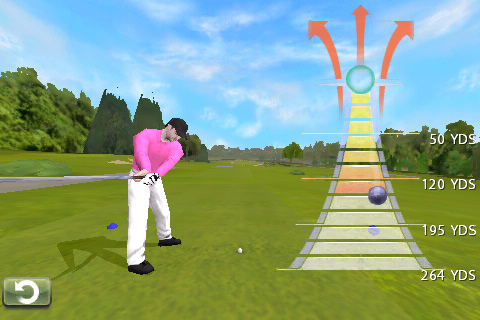 Gameplay takes place across seven of the most famous PGA courses in the world — 120 holes in all: Pebble Beach, St. Andrews, TPC Sawgrass, The K Club, Doral, Fancourt, and TPC Boston.  The various courses, naturally, each have their own, distinct layout and also feature a variety of weather settings, as indicated by the nice looking, animated cloud systems in the sky.

While the courses, as rendered, well convey a “large" feel to the simulated golf experience, the polygon count and texture quality of the various flora, as well as the character models, are rather low.  This was clearly a decision made in order to allow for the impressive framerate and smooth animation (as tested on an iPhone 3G and 2G iPod touch) that adds so greatly to the game’s realistic feel.  The end result is a game with nice looking visuals and a quality of motion that is suggestive of a sports TV network rather than a typical mobile golf game, even if the most intricate 3D rendering ever seen on the iPhone is not to be found here. 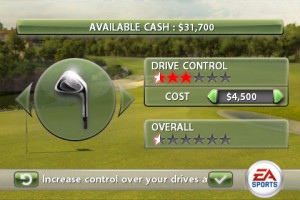 Another positive aspect of the game is the audio.  The whole presentation here shines with big studio polish.  The ambient “course sounds" (wind, realistic ball thud, etc.) convey a nice sense of being out on the fairway.  Adding to this, and again bringing to mind a TV sports network, is the voiceover commentary from former pro golfer Sam Torrance and The Golf Channel’s Kelly Tilghman.  The interplay and appropriate placement of the many quips from both commentators is well done and adds quite nicely to the game.  It’s worth noting that in-game commentary can be harsh and, frankly, annoying when you are just learning the game, however, now that I’ve hit my stride, I feel that Kelly, Sam, and I are becoming close friends."  If it’s too much to bare, the commentary can be optionally disabled. 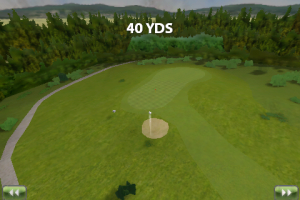 One of the most notable features of the game is its swing system.  Golf games on the iPhone, like any other platform, offer widely varying methods of simulating the act of swinging a club to drive the ball down the course.  Getting it “right" is a tall order.  I consider TW’s innovative swing system to be the best I’ve seen on any golf game.  The game presents an onscreen swing meter that’s graded with an ascending, marked distance scale.  To swing, the player drags the golf ball at the top of the swing meter downwards to the desired distance marker (the backswing), and then slides it back up through the top of the meter to deliver the swing.  Keeping the golf ball centered on the swing meter during the sliding process delivers a straight and true swing, while adding a bit of curve to the left or right while sliding lends a degree of fade or draw to the ball.  It gives a much more “involved" feeling to the swing process than the standard multi-tap/click scenario and is the most satisfying arrangement I’ve encountered.  (And, while PC versions of the Tiger Woods franchise offer similar, mouse-based controls, swiping the screen directly takes the mechanic to, really, another level.)  Once the ball is in the air, a ball icon appears at the bottom of the screen.  Swiping the icon repeatedly in any direction adds English to the ball to affect its behavior upon landing.

Well executed actions on the course result in a cash prize accumulation.  The money can be used to take part in PGA events and to enhance various aspects of your player’s game in the Equipment section. The prize cash can be used to enhance Power, Power Boost, Drive Control, Impact, Approach, Putting, Recovery, and Spin.

I am not, in real life, a golf player.  As such, I’m pretty open as far as what makes for a fun game of golf on a computer.  And so, I enjoy playing a few rounds of most any quality golf game.  My favorite of late has been Gameloft’s Let’s Golf.  How does Tiger Woods PGA Tour compare on my list?  It’s, in my opinion, a pretty close call, with a slight lean towards Tiger Woods PGA Tour because of its uncommonly solid swing system.  It would seem that any true golf fan who spends actual time on a fairway will find the realistic Tiger Woods PGA Tour to be a most satisfying mobile golf game, worth the price of admission.