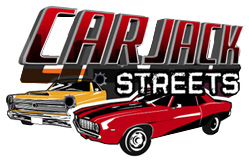 A long time ago, in a casino far, far away gambling addict Randal Meyers gets a harrowing wake-up call.  Italian Mob boss Frankie has finally called in his million dollar gambling debt–it’s payback time for Randal.  It’s either $50,000 a week in Frankie’s pocket or blood on the asphault.  And the worst part of it all?  Randal is you.

Thus begins Tags Games’ just-released iPhone version of Car Jack Streets [App Store], an urban role playing game that strives to bring the Grand Theft Auto formula to mobile devices in a way that makes sense for the gamer on the go. 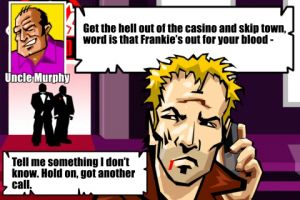 At the start of the game, Randal finds himself standing in northwest Jack City next to his flaming sports car, courtesy of Frankie’s car bomb.  Helpful uncle Murphy sets him up with some wheels, a place to lay low, and $5,000 cash for a first, good-will payment to Frankie.  Murphy puts the word out that Randal needs to make some fast dough to keep the bullets away.  In no time, jobs of all sorts start popping up and the task at hand is get to work — and fast — because $50,000 a week is no small sum to earn in Jack City.

Randal’s money-making options are many and fall on both sides of the law.  While, as one might expect, money can be earned by jacking cars for chop shops, helping with bank robberies, delivering “merchandise," and knocking off or protecting thugs, there are also legit ways to bring in the cash, such as driving taxis and buses and delivering pizza.  A pizza pays a bit less than a hit, however…  Additional mini-missions pop up from time to time, as well, such as causing $25,000 city property damage in 30 second or gathering a cult of 10 people to perform a suicide pact in under a minute.  (Good wholesome fun, really.)  In all, there’s enough variety to the jobs and locales involved, helped by the peppering of mini-missions throughout, that I don’t see the action wearing thin as players wrack up hours of gameplay in an effort to pay back Frankie’s million. 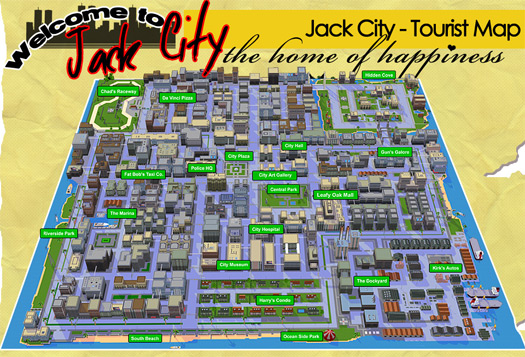 Jack City, pictured above, is a large play area that’s host to a variety of venues, such as the busy grids of business districts, a dockyard, parks, a marina, and residential areas.  The game presents a top-down view of the action on the streets.  Certain features of the city, such as buildings, lightposts, and bridges, are represented in 3D models while other objects in the game, such as people, vehicles, and weapons badges are 2D sprites, derived from 3D models.  The result is a colorful game world that feels not-fully-3D, but well beyond what one would call a 2D experience.  The iPhone version of the game, thanks to the device’s hardware capabilities, utilizes true-color and offers an improved visual experience as compared to the original mobile title. 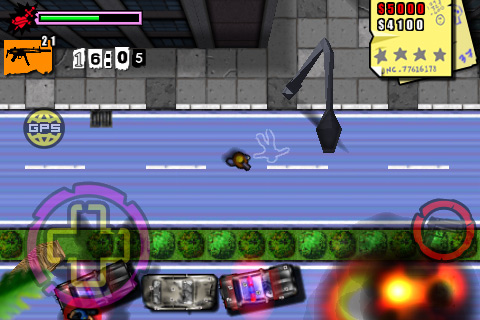 Rather than setting out to create an exact GTA clone, the developers wanted to make Car Jack City particularly well suited for pick-up, mobile play.  Play sessions of 15-20 minutes were the target when creating the game.  One way they sought to make it manageable on this level is by delivering a real-time game experience.  Frankie demands $50,000 per week.  That’s seven real days, to you and me.  Neglect the game too long and it’s curtains for Randal.  When you play at night, it’s nighttime in Jack City–headlights, streetlights and all.  You might be playing at 2 o’clock in the afternoon and see a job come up to lay down at hit across town at 2:10 PM.  Real time.  After spending many hours with the game over the past few days, I unreservedly applaud this approach.  It’s great to debate whether you’ve got time to make “a delivery" a few blocks away, realizing you’ve arrived too early to the site of a 4:15 bank job.  The time management component feels very real, because it is. 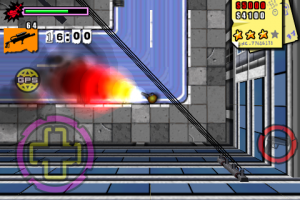 Randal is able to jack any vehicle in town, and a significant array of vehicles there are: sports cars, touring sedans, SUVs, taxis, luxury cars, trucks–the list goes on. “Tools of the trade" are scattered about the city and can be freely collected. Machine guns, shot guns, grenades, rocket launchers, and flame throwers are among the available arsenal, along with ammunition, health packs and even disguises which help in evading local law enforcement.

The game utilizes touch controls for movement around the city. When on foot, a virtual D-pad at the lower left of the screen controls movement with on-screen buttons at the lower right for firing weapons and jacking vehicles. When driving, a lower-left control is available for steering, with forward, reverse, and boost controls at the lower right of the screen.  The controls take some getting used to, but even after a few days of play, the driving controls in particular feel a bit hard to handle.   There is a setting for choosing “digital" or “analog" control modes, which may help some players, but in the end I think larger control areas would make for a better gameplay experience.  I’ve gotten busted by the cops a number of times while fumbling to get my vehicle turned around and on the way out of there. 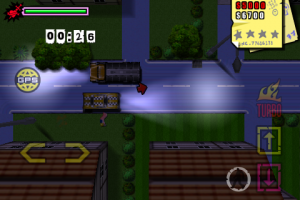 At the top of the screen is a health bar and a note that indicates money owed Frankie as well as the current cash level, and a four-star indication of your Police “wanted" level (in this case, the fewer stars, the better).  An onscreen GPS button brings up a list of of relevant locations, such as Murphy’s safe house, Frankie’s place, and target locations for the various jobs that present themselves, which can be tracked by Randal’s GPS unit.  The game uses the GPS system and directional arrows in lieu of an on-screen mini map.  A minor gripe I have with the game is the fact that, upon quitting out to the home menu and reloading, only the core items remain in the GPS list (such as the safe house and Frankie’s place); recent job-related items are gone and Randal ends up back at the safe house.  Granted, given the real-time nature of some of the jobs, it wouldn’t make sense for those to remain, but starting back at the safe house at the beginning of each session, I find a bit tedious.

On the audio front, Tag Games did not skimp.  The studio rounded up a variety of unsigned artists from the US and the UK to assemble a mix of audio tracks across a variety of genres for in-car playback on Jack City’s rock, pop, country, and hip hop radio stations.  (They player can, alternatively, listen to tunes from his or her iTunes library, instead.)  It’s an impressive mix of great sounding tunes that add much to the excitement of a police chase through Jack City–not to mention the amusing DJ banter and radio ad spots smattering the broadcasts.  When the player is on foot, enveloping “city sounds" (horns, engines, dogs barking, etc.) help bring the scene to life. 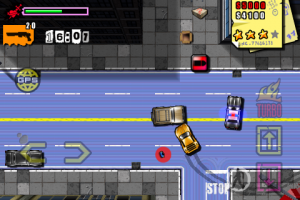 In evaluating Car Jack Streets for the iPhone, one can’t help but draw a comparison to GTA-like Payback [App Store] from Apex-Designs.  As a fan of Payback in its pre-iPhone, GP2X days, I can say that it definitely has a lot going for it.  It offers intense action across multiple city venues and its top-down rendering is fully 3D (with a particularly impressive lighting model).  But comparing the titles side-by-side, Car Jack Streets stands out as the more polished title, with greater play variation — or, perhaps, flexibility — thanks to the rapidfire arrival of jobs from which the player can pick and choose to best meet the available play time.  Car Jack Streets is the more enjoyable game, on the whole.

Car Jack Streets Managing Director Paul Farley and Creative Director Jamie Bryan both worked for DMA Design (which became the Rockstar North studio) in the mid ’90s and were involved in the creation of the original Grand Theft Auto.  The GTA franchise is a phenomenal success.  Every installment has garnered near-perfect reviews and, as of March 2008, has sold over 70 million copies worlwide.  The fact that the Car Jack Streets team had a hand in the genesis of Grand Theft Auto is evident in Tag Games’ iPhone offering.  GTA fans cannot go wrong with Car Jack Streets for the iPhone.

And the most telling part?  While I’ve had casual fun enough with GTA and its ilk, it was only during the research for my review of this game that I became a real fan of the genre, despite the issues I note.  Take that for what it’s worth.

Tag Games has posted a series of Developer Diary videos that give a look at what went into the creation of Car Jack Streets.