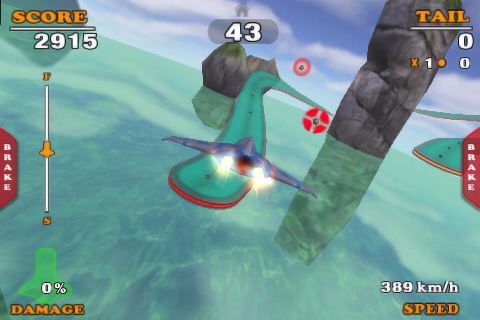 We previously highlighted some impressive footage of the game, but haven’t heard much since August.

Strap yourself down in the hot seat of a high performance aircraft and get ready for a true adrenaline rush. Clusterball(r) Arcade is a fast paced action game played in third person.

In Clusterball Arcade your objective is to collect balls from ramps and score them through ring shaped checkpoints. Success is highly dependent on your skill to avoid obstacles and hazards that come rushing towards you. Grab power ups and time balls to get an extra advantage in order to complete the stages. Play 10 gradually more demanding stages in real life locations such as Monument Valley, Halong Bay and Bering Strait. Flying fast and playing well will set you up nicely for the Final Stage, if you got the balls to reach it that is.

Remember, in Clusterball Arcade time is not on your side.

Originally billed as Clusterball 2, the final version that has appeared into the App Store is Clusterball Arcade. This video still represents the game (though some of the startup screens are different) and will have a full review shortly: